A 9-year-old boy is seen in the pediatrician's office with a several days' history of weakness of his mouth.
Lior Raz-Farley
Follow
Like

He reports that he had a viral upper respiratory tract infection (URI) about 2 weeks prior. He denies headache, fever, vomiting, constipation, or weakness. He has been a healthy child without serious previous illnesses. On physical examination the vital signs are normal. The left side of his mouth droops, he is unable to completely close his left eye, and his smile is asymmetric (Photograph). The mucous membranes are pink, moist, and without lesions. Extraocular eye movement and fundoscopic examinations are normal. The chest is clear. Heart has a normal S1 and S2 without murmur. The abdomen is soft and nontender. No hepatosplenomegaly or adenopathy is noted. Gait, sensation, and deep tendon reflexes are normal.

Which of the following is the most likely diagnosis?

The correct answer is E.

Bell palsy is an acute, unilateral facial nerve palsy that begins about 2 weeks after a viral infection. Although the exact pathophysiology is unknown, reactivation of herpes simplex or varicella-zoster virus seems to be the most common cause; demyelination through an autoimmune process or allergic inflammation may also play a part in some cases. On the affected side, the upper and lower face are typically paretic, the mouth droops, and the patient cannot close the eye. Treatment consists of maintaining moisture to the affected eye (especially at night) to prevent keratitis. Complete, spontaneous resolution occurs in about 85% of cases, 10% of cases have mild residual disease, and about 5% of cases do not resolve. Occasionally infants will have facial nerve palsy at birth; this is usually related to compression from forceps and spontaneously resolves over several weeks. As this is a compression neuropathy, it should not be called congenital Bell palsy.

Guillain-Barré syndrome is classically described as a demyelinating neuropathy that causes ascending weakness and diminished reflexes. Symptoms of paresthesia (occasionally pain) classically start in the hands or feet and then move centrally before affecting facial, respiratory, or other central structures.

The most common form of botulism in the United States is "infant botulism" classically described as resulting from the ingestion of honey, but more often the source is unknown. Other forms of botulism occur as "food-borne" or "wound". In older patients with food-borne or wound botulism the first symptoms are cranial nerve findings of diplopia and blurred vision, dry mouth, and then descending weakness and paralysis. Infant botulism typically presents in the 2-4-month-old infant as constipation, poor gag reflex, and then descending weakness and paralysis.

Ischemic stroke typically is an abrupt onset of neurologic symptoms that might include a combination of visual defects, blurred vision, ataxia, aphasia, and change in consciousness. Hemorrhagic stroke may also have the symptoms of nausea, vomiting, and headache. Isolated facial droop would be unusual for either. 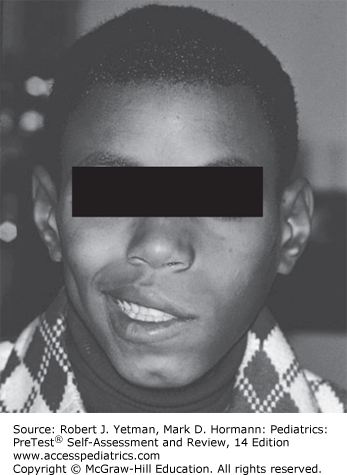 A 9-year-old boy is seen in the pediatrician's office with a several days' history of weakness of his mouth.