The history shows that the child was born after an uncomplicated pregnancy and delivery. He has been well with no medical complications or hospitalizations. The parents do not remember that anyone was concerned about his size at birth, but they noted shortly thereafter that he was not growing as they expected and they felt that he has short extremities. They also report that recently he has been snoring more at night and has loud breathing during the daytime.

Based on the clinical features the most likely diagnosis is:

The correct answer is A.

Achondroplasia is characterized by abnormal bone growth that results in short stature with disproportionately short arms and legs, a large head, and characteristic facial features. The clinical features include short stature, rhizomelic (proximal) shortening of the arms and legs with redundant skin folds on limbs, limitation of elbow extension, trident configuration of the hands, genu varum (bow legs), thoracolumbar gibbus in infancy, exaggerated lumbar lordosis, which develops when walking begins, large head with frontal bossing, and midface hypoplasia. Turner syndrome is characterized by short stature but not by macrocephaly or the other clinical features noted. Hypochondroplasia is very similar to achondroplasia but is typically less severe and does not have the facial features listed. OI is a disease characterized by bone fractures. 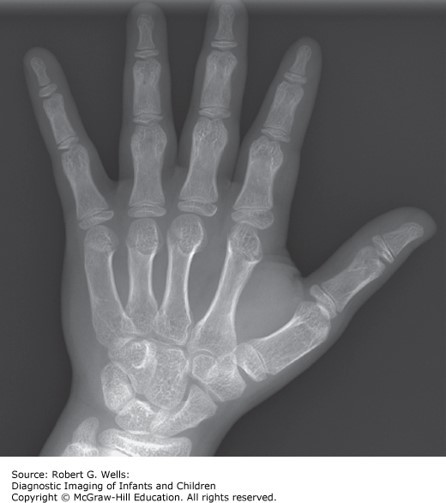 A 6-month-old boy comes for evaluation of short stature.