Herpes simplex virus (HSV) infection, cerebral cortex. Infants with HSV-1 or HSV-2 encephalitis without disseminated disease typically present later, usually in the second or third week of life and occasionally as late as 4–6 weeks of age. Clinical findings include fever, irritability, lethargy, poor feeding, seizures, a bulging fontanelle, or focal neurologic findings. Skin lesions may or may not be present at the time of diagnosis. In contrast to HSV encephalitis in adults, which is often localized to the temporal lobes, CNS-associated HSV infections in the neonate often involve multiple foci in the brain, including rare case reports of brainstem or cerebellar involvement. 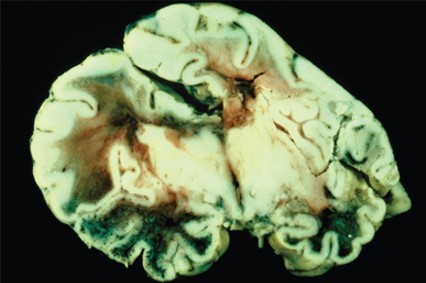