Autism. Brain areas implicated in the three core deficits characteristic of autism: impaired social interaction, impaired language and communication, and severely restricted interests with repetitive and stereotyped behaviors. Areas implicated in social deficits include the orbitofrontal cortex (OFC), the anterior cingulate cortex (ACC), and the amygdala (A). Cortex bordering the superior temporal sulcus (STS) has been implicated in mediating the perception that a living thing is moving and gaze perception. Face processing involves a region of the inferior temporal cortex within the fusiform gyrus (FG). Comprehension and expression of language involve a number of regions including the inferior frontal region, the striatum, and subcortical areas such as the pontine nuclei (PN). The striatum has also been implicated in the mediation of repetitive behaviors. A number of imaging and postmortem studies have indicated that the cerebellum may also be pathological in autism. 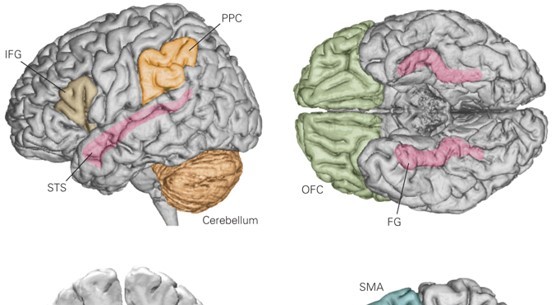