A 17-year-old girl presents with a 2-week history of fever, runny nose, cough, sore throat, fatigue, and some abdominal pain.
Leah Carton
Associate Editor - Pediatrics, Dermatology, Geriatrics , McGraw Hill
Follow
Like Be the first to like this
0

A 17-year-old girl presents with a 2-week history of fever, runny nose, cough, sore throat, fatigue, and some abdominal pain. She was seen by another provider 1 week ago, at which time she had enlarged, erythematous tonsils, with bilateral anterior cervical adenopathy. She had a positive rapid streptococcal antigen throat swab, a negative Epstein-Barr virus (EBV) heterophile antibody test, and positive cytomegalovirus (CMV) IgG antibody test. She was prescribed amoxicillin, which she has taken faithfully. She now has developed a generalized maculopapular rash that is somewhat pruritic. Her exam is relatively unchanged from last week, but you notice her spleen tip is palpable. She is non-toxic appearing, although she appears ill.

The most likely explanation of her symptoms is:

A. She has scarlet fever caused by Streptococcus pyogenes.

C. She has infectious mononucleosis caused by EBV.

D. She has infectious mononucleosis caused by CMV.

The correct answer is “C.” Viral illness is the most common cause of pharyngitis in children. Etiologies include EBV, CMV, adenovirus, enteroviruses, herpes simplex virus (HSV), rhinoviruses, parainfluenza virus, and rarely HIV. A monospot negative mononucleosis syndrome would make one suspect a virus such as CMV. This patient’s CMV IgG was positive, which would be indicative of prior illness, rather than acute CMV infection. CMV seropositivity can be high, ranging from 50% to 80% depending on age, ethnicity, and socioeconomic status. Splenomegaly is not a common finding in mononucleosis caused by CMV in a normal host. This patient has EBV mononucleosis with a false-negative heterophile antibody test. The heterophile antibody test (ie, monospot) is a useful, rapid test for diagnosing acute EBV infection. However, it can be negative up to 10% to 20% of the time. EBV can have a broad range of symptoms, including pharyngitis, lymphadenopathy, URI symptoms, and hepatosplenomegaly. Other organ systems can be involved as well, although this is rare in immunocompetent patients. Chronic active infection can occur in immunocompromised patients. Other rare complications include encephalitis, hemophagocytic syndrome, cancer (Burkitt lymphoma), and post-transplant lymphoproliferative disease. Rash is common when amoxicillin is used. It can be pruritic and typically begins 5 to 10 days after starting the antibiotic. It is not considered an allergy and will resolve after cessation of the offending antibiotic. Mycoplasma may cause pharyngitis as can gonorrhea in sexually active patients or in the setting of sexual abuse. A. haemolyticum can cause pharyngitis that can have associated scarlatiniform rash. It can cause gray membranes on the tonsils, reminiscent of diphtheria. It typically affects adolescents and young adults. It can be detected on culture and usually is susceptible to penicillins as well as a broad range of other antibiotics often used to treat pharyngitis. Group A beta-hemolytic Streptococcus (GAS, S. pyogenes) only accounts for 15% to 30% of pharyngitis in children. Additionally, up to 20% of children can have asymptomatic carriage of GAS, leading to misinterpretation of rapid tests and throat cultures in the setting of pharyngitis. There has never been a case of GAS resistant to penicillin, and symptoms typically improve within 24 to 48 hours of initiation of appropriate therapy in the setting of simple pharyngitis. Interestingly, up to 40% of children with GAS pharyngitis still have positive throat cultures despite successful treatment with antibiotics. Other symptoms such as cough, runny nose, and splenomegaly are not associated with strep pharyngitis. 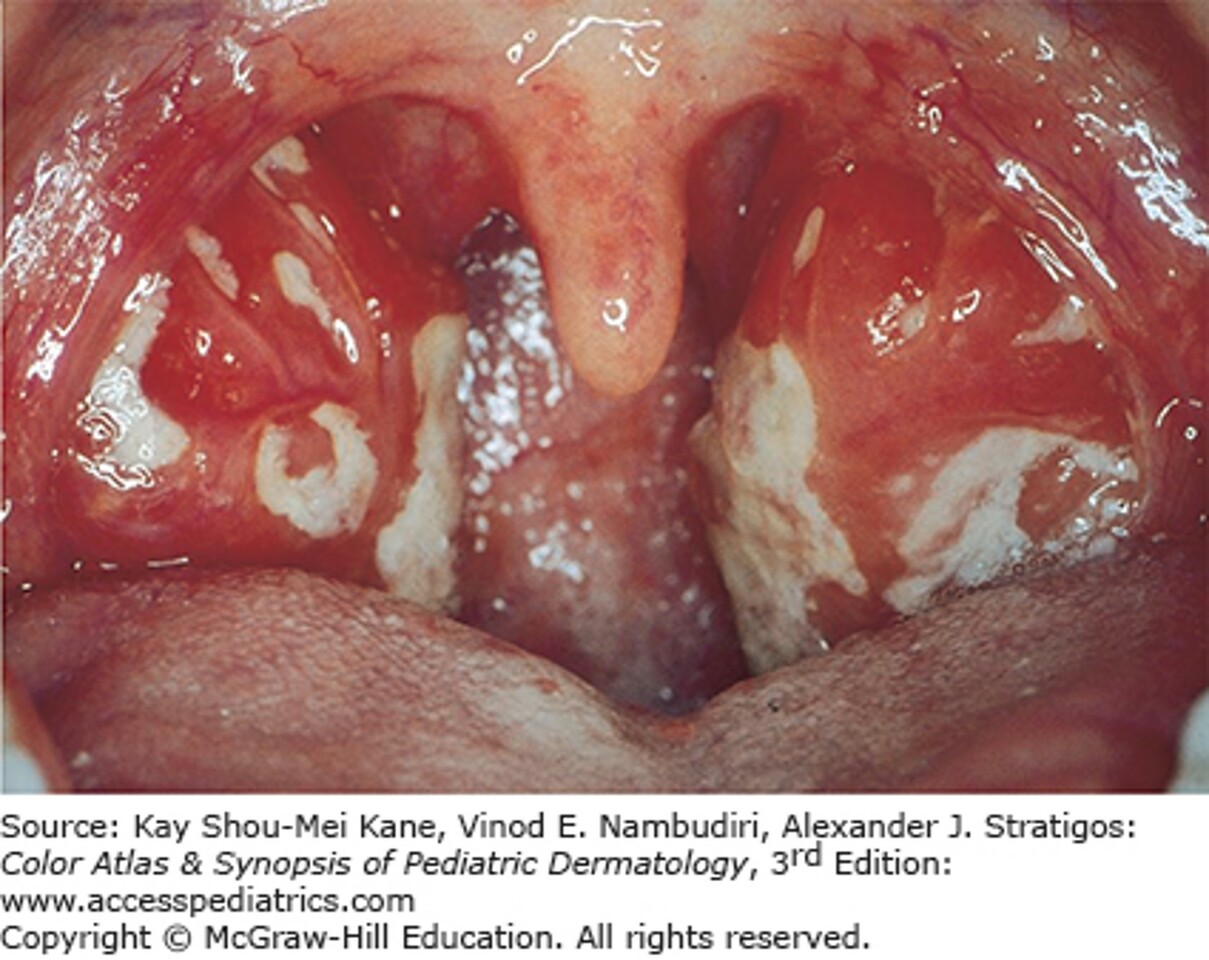 A 17-year-old girl presents with a 2-week history of fever, runny nose, cough, sore throat, fatigue, and some abdominal pain.