Bullous pemphigoid (BP) is another of the autoimmune disorders that manifests in multiple fluid-filled blisters due to the effect of auto-antibodies directed toward components of the basement membrane in the skin.
Rose Hamm
Physical Therapy, University of Southern California
Follow
Like

Bullous pemphigoid (BP) is a sub-epidermal autoimmune blistering disease associated with tissue-bound and circulating autoantibodies directed against BP antigen 180 (also known as BPAG2) and BP antigen 230 (also known as BPAG 1), both components of the basement membrane.[i]  An immune reaction is initiated by the formation of IgG autoantibodies that target dystonin, a component of the hemidesmosomes, resulting in the infiltration of immune cells to the area.  The consequence is separation of the dermal/epidermal junction with fluid collection and blistering or bullae.  The severity of the disease is IgE dose dependent and correlates with the degree of eosinophil infiltration in the skin.[ii]

BP occurs most commonly among the elderly, and the most common sites of involvement include inner aspects of thighs, flexor aspects of forearms, axilla, groin and oral cavity.  The distal extremities can also become involved.  Itching is the first dominating symptom of BP, which progresses to urticarial lesions, erythematous edema, papules, eczematous lesion, and typically widespread tense bullae filled with clear fluid.1 BP tends to persist for months or years with spontaneous remission and flare-ups.

Histologically, BP is the prototype of a sub-epidermal bullous disease along with eosinophilic

spongiosis. The dermis shows an inflammatory infiltrate composed of neutrophils, lymphocytes, and eosinophils.  Diagnosis is confirmed by the presence of linear deposits of IgG and/or C3 along the dermal-epidermal junction on direct immune-flouroscence and IgG class circulation autoantibodies that bind to the epidermal (roof) side of the skin basement membrane on indirect immunoflourscence.[iii] A systematic review by Kowalski et al found the following significant alterations in patients with BP: increased serum levels of IL-5, IL-6, IL-8, IL-17, CCL-17 and CCL-26; increased blister fluid level of IL-5, IL-6, IL-8, CCL11, and TNF-α; and decreased blister fluid levels of IL-1α.[iv]

Wound management is predicated on minimizing pain, preventing infection, and promoting re-epithelization.  Blisters may denude leaving partial thickness wounds that are best covered with non-adherent absorbent dressings.  Lower extremities that are edematous due to the diffuse inflammatory response may be managed with compression bandages, depending on the extent and fluctuance of the blisters.

In summary, BP is another of the autoimmune disorders that manifests in multiple fluid-filled blisters due to the effect of auto-antibodies directed toward components of the basement membrane in the skin.  BP is treated with anti-inflammatory and immunosuppressant medications, and meticulous skin care. 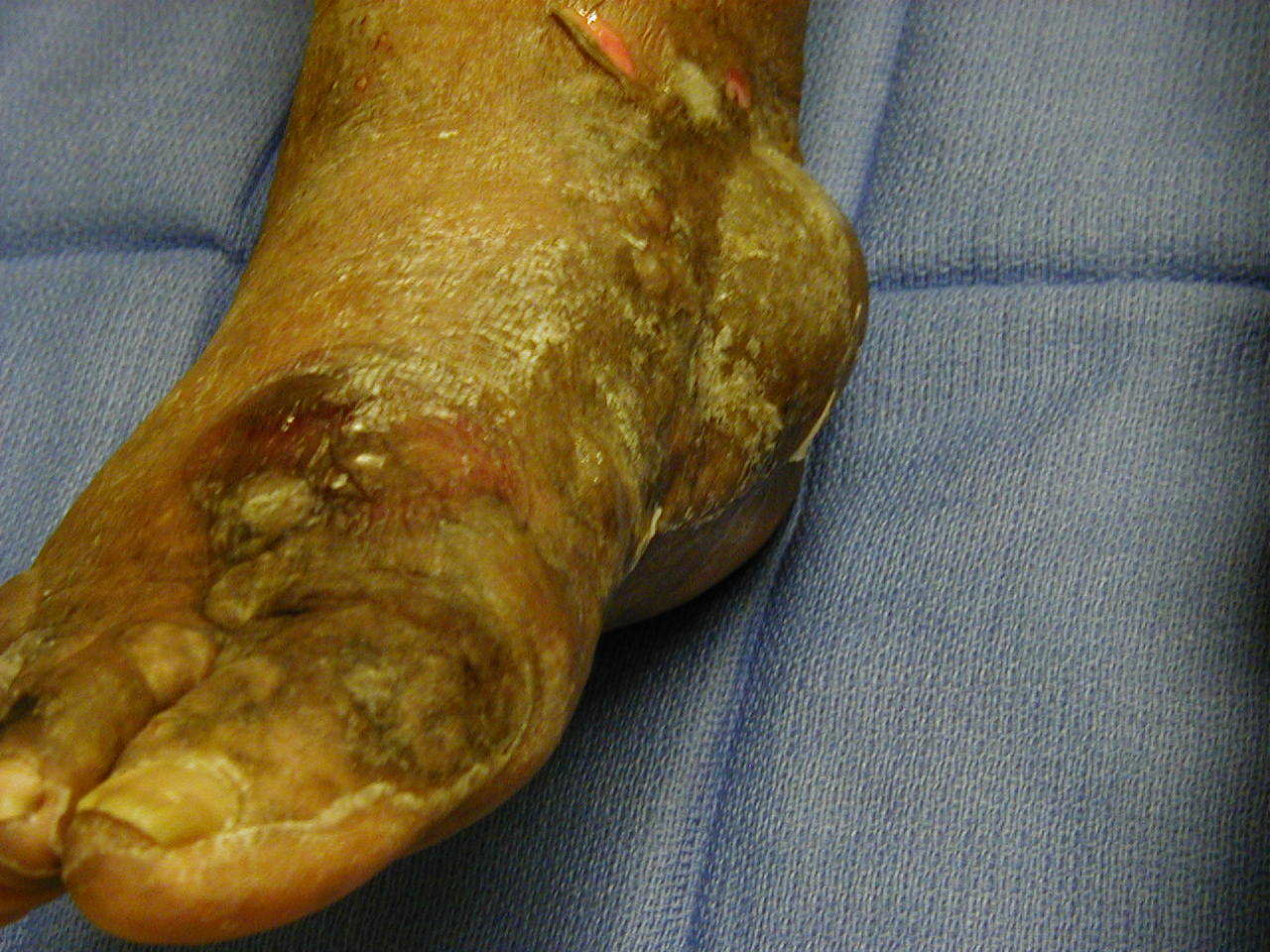 Bullous pemphigoid (BP) is another of the autoimmune disorders that manifests in multiple fluid-filled blisters due to the effect of auto-antibodies directed toward components of the basement membrane in the skin.