Any patient with an abnormal skin appearance that is suspicious of being a melanoma based on the ABCDE characteristics should be referred emergently to a qualified dermatologist or plastic surgeon for immediate diagnosis and treatment.
Rose Hamm
Physical Therapy, University of Southern California
Follow
Like

Melanoma, the most lethal form of skin cancer, involves the melanocytes in the basal layer of the epidermis. There is an abnormal growth of melanocytes which are unable to respond appropriately to regulatory cues from the keratinocytes as a result of a mutation in the genes that regulate cell growth. The lesion may originate as a nevus or mole which is formed when there is an overlap in growth involving both the epidermis and dermis[i] or it may originate from transformed stem cells, in which case the melanoma may be resistant to treatment.[ii] A melanoma can also occur as a new, abnormally appearing mole or freckles. When two or more moles are adjoining, they may appear similar to a melanoma and are termed “collision nevi.”

Melanoma occurs most frequently in anatomical areas that are exposed to ultraviolet rays from the sun or from tanning beds, but can also occur in the eyes, nails, genitals, and non-sun exposed areas. They present in the following descriptive types:

The clinical appearance of melanoma is best described by the ABCDE presentation:

Melanomas are classified by depth according to the Breslow and Clark Depth Scales:

Any lesion suspicious of being a melanoma is first confirmed or negated by a surgical or shave biopsy to at least determine the dermal layer, with care for the biopsy to obtain the entire area of concern because partial biopsies may yield false negative results. A Pigmented Lesion Assay (PLA) is a non-invasive diagnostic method that uses an adhesive patch to obtain mRNA from the surface of a suspected melanoma, and may be used in lieu of a biopsy.[v] myPath Melanoma is a diagnostic test that measures the expression of 23 genes in a suspicious lesion in order to distinguish a malignant melanoma from a benign nevus. DecisionDx-Melanoma test is a gene profile test to help determine recurrence or metastasis of melanoma. Because of the validity and specificity of these tests, genetic testing is advised for patients who have a strong familial history of melanoma.[vi]

Once a positive diagnosis is confirmed, treatment involves wide local excision, followed by sentinel node biopsy, chemotherapy, and radiation if needed. The results of the sentinel node biopsy and the Breslow thickness are strongly predictive of prognosis/survival for patients with a melanoma.[vii] Mohs surgery with immunohistochemistry or slow Mohs may be used for melanoma in situ, thin melanomas, or lentigo maligna.

No wound management is indicated unless the excision results in a non-healing wound, in which case standard moist wound therapy is advised. Use of any biophysical agents (electrical stimulation, ultrasound) would be contraindicated.

In summary, any patient with an abnormal skin appearance that is suspicious of being a melanoma based on the ABCDE characteristics should be referred emergently to a qualified dermatologist or plastic surgeon for immediate diagnosis and treatment.

[i] Mabeta P. Paradigms of vascularization in melanoma: Clinical significance and potential for therapeutic targeting. Biomedicine & Pharmacology. 2020;127. Available at https://doi.org/10.1016/j.biopha.2020.110135. 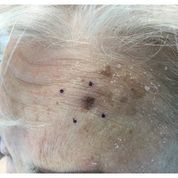 Any patient with an abnormal skin appearance that is suspicious of being a melanoma based on the ABCDE characteristics should be referred emergently to a qualified dermatologist or plastic surgeon for immediate diagnosis and treatment.