DIHS is an allergic reaction to ingested or IV drugs that requires identification and cessation of the offending medication, management of under-lying autoimmune disorders, supportive care to prevent complications, and meticulous wound care to prevent infection.
Rose Hamm
Physical Therapy, University of Southern California
Follow
Like

Drug-induced hypersensitivity syndrome (DIHS) is an immunologic response to a drug received either orally, by injection, or by IV. Although not fully understood, the process is similar to what occurs with skin allergies except that the immune response is activated by the causative agents and their metabolites rather than by a direct effect on the keratinocytes.[1] There are numerous syndromes based on severity, types of lesions, and underlying diseases processes; however, all of them produce generalized (rather than localized) skin lesions, as well as systemic symptoms.

Table 1.  DIHS syndromes based on severity of symptoms

Adverse drug reactions have been classified as Type A: those that are predictable and dose-dependent reactions, including overdose, side effects, and drug interactions (e.g., a gastrointestinal bleed following treatment with non-steroidal anti-inflammatory drugs [NSAIDs]); and Type B, those that are unpredictable, more likely to be dose independent, and may include immunologically mediated drug hypersensitivity or non-immune-mediated reactions, thus being considered allergic reactions.[2] The most commonly reported medications that cause DIHS are the following:

Symptoms of DIHS include generalized rash (with or without vesicles) and any of the following: local eruptions, fever (>38ᴼ C), lymphedema, mucosal lesions, conjunctivitis, and epidermal sloughing. Other reported symptoms include liver abnormalities, leukocyte abnormalities (at least one of the following: leukocytosis, atypical lymphocytosis, or eosinophilia) and HHV-6 reactivation.[3]Onset is usually 2–3 weeks after the first exposure to the offending drug, beginning with a fever or sore throat and progressing to the cutaneous/mucosal involvement, at which point the response is either SJS or TEN depending on the amount of body surface involvement. In the younger adult population (20–40 years), the syndrome is termed erythema multiforme. A literature review by Madigan and Fox suggested that “vancomycin-induced cases present with a unique phenotype characterized by a higher burden of renal involvement.”[4]  Shiohara reports that approximately 50% of the cases had an episode of infection within the previous month of onset, particularly a virus, consistent with the view in literature that viruses are key in the generation and activation of drug-specific T cells.3   Symptoms can continue to worsen even after withdrawal of the offending drug.  The patient in the attached photo developed symptoms 2 weeks after initiating an over-the-counter diet supplement that was ordered online.

Medical management of DIHS begins with identification and cessation of the causative agent, which is usually the last one that the patient has initiated taking. Depending on the severity of the symptoms, systemic corticosteroids are the gold standard to prevent progression and relieve symptoms in the acute phase, beginning with 40-50 mg/day and tapering over 6-8 weeks.3  Supportive care is provided in an intensive care unit or a burn unit for more severe cases such as SJS and TEN.

In minor cases, cessation of the medication may be sufficient to reverse symptoms and no wound care is needed. In more severe cases with epidermal sloughing, treatment is similar to that of a deep superficial burn except that debridement of the detached epidermal tissue is usually not advisable because of potential loss of fluids. Non-adherent antimicrobial dressings are recommended to help prevent infection and to avoid further skin tearing with dressing changes. Prevention of fluid loss and infection are paramount, and as the patient improves, dressings to promote re-epithelialization are recommended.

In summary, DIHS is an allergic reaction to ingested or IV drugs that requires identification and cessation of the offending medication, management of under-lying autoimmune disorders, supportive care to prevent complications, and meticulous wound care to prevent infection. 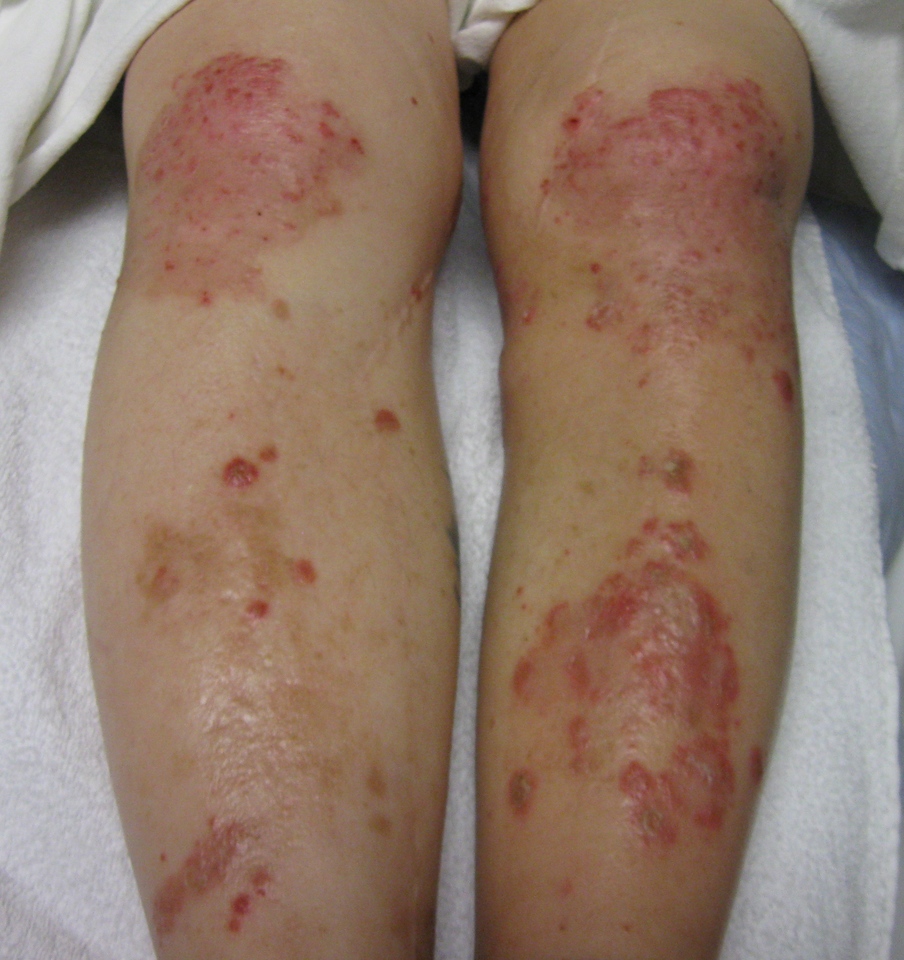 DIHS is an allergic reaction to ingested or IV drugs that requires identification and cessation of the offending medication, management of under-lying autoimmune disorders, supportive care to prevent complications, and meticulous wound care to prevent infection.