Ultraviolet C has been shown to kill bacteria in wounds without harming the adjacent healthy cells, and is a useful tool in treating chronic wounds that are critically colonized or infected.
Rose Hamm
Physical Therapy, University of Southern California
Follow
Like

Ultraviolet (UV) radiation has been studied as a bactericidal modality since the 1930’s and reported in seminal journal articles.[i],[ii]   The increasing prevalence of multi-resistant bacteria has led to more recent studies of the bactericidal effects, specifically of ultraviolet C.  Ultraviolet irradiation is electromagnetic irradiation with the following wavelengths:  vacuum UV – 100-200 nm; UVC – 200-280 nm; UVB – 280-315 nm; UVA – 315-400 nm.  UVB has been used for phototherapy to treat dermatologic disorders such as psoriasis and atopic dermatitis; however, chronic prolonged exposure to UVB has been linked to carcinogen formation.[iii]  The use of UVC has become the focus of research on cutaneous wound healing because the amount of irradiation required to kill bacteria is significantly less than the amount required to cause damage to mammalian cells.[iv]

UVC inactivates microorganisms by damaging the genetic material in the cell nucleus, especially in the range of 250-270 nm, known as the germicidal spectrum.  The peak germicidal wavelength is 262 nm, and most of the available equipment for wound treatment produces 254 nm.  The irradiation causes dimerization (defined as the process by which two molecules of the same chemical composition combine to form a polymer) of thymine molecules in the DNA, making it difficult for the nucleic acids to replicate.  This damage in the DNA of the microorganisms prevents both repair and replication of the bacteria in the wound.  It has been found that any UVC-induced damage to surrounding host cells can be rapidly repaired by the DNA repairing enzymes.  Thus UVC is considered a safe, non-carcinogenic intervention for reducing the bacteria that inhibit wound healing, including multi-resistant strains, and thereby improving healing potential.

Studies to determine the amount of exposure needed to kill various resistant organisms were performed by Conner-Kerr, using 254 nm, 15.54 mW/cm2 output with in vitro experiments.  She reported 99.9% kill rate with irradiation times of 5, 8, 15, 30, 45, and 60 seconds and a 100% kill rate with 90 and 120 seconds, for methicillin-resistant s. aureus. For vancomycin-resistant E faecalis, she reported 99.9% kill rates with exposures of 5, 8, 15, and 30 seconds.[v]  Other studies have shown that UVC may be most effective in decreasing the CFU’s of P aeruginosa, as well as being most effective in wounds colonized with only one species of bacteria.3   In addition, UVC is considered effective prophylactically and at least prior to the formation of biofilm by existing bacteria, as higher doses of radiation are needed to penetrate the biofilm and inactivate the microorganisms residing in the polysaccharide “house.”4

Although studies on in vivo bacteria and healing rates are limited with small subject numbers, the following parameters have been recommended for the treatment of chronic wounds (including venous ulcers, diabetic foot ulcers, and surgical incisions) in order to reduce bacteria loads and promote healing:

UVC is contraindicated for the following patients:

In summary, UVC is a safe and effective adjunct therapy for wounds that have critical colonization or infection present, and is faster in eradicating surface bacteria than antibiotics.  It is inexpensive and time-efficient, can be applied in any wound care setting, and is effective against many of the drug-resistant microbes that are difficult to treat with antimicrobial dressings alone.

Further information on the theory and use of UVC may be found at the following site:

[i] Hollaender A, Claus WD.  The bactericidal effect of ultraviolet radiation on Escherichia coli in liquid suspensions.  Journal of General Physiology.  1936;19(5):753-765. 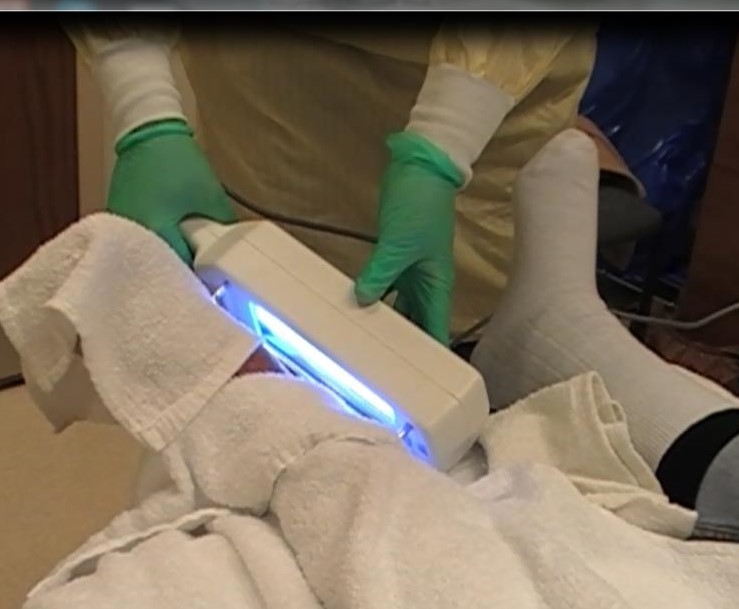 Ultraviolet C has been shown to kill bacteria in wounds without harming the adjacent healthy cells, and is a useful tool in treating chronic wounds that are critically colonized or infected.