His head is preferentially held in a tilt to the left and rotation to the right. He also has flattening of the right occiput. Shaking keys to the right and left side reveals that he can rotate 90 degrees to the right and 60 degrees to the left. He has a palpable mass within the left sternocleidomastoid muscle. His parents have tried adjustments to his home environment, consisting of laying him in his crib with his right side toward the wall and a music box to his left, to stimulate him to turn more to his left side.

What is the most appropriate next step in management?

B. Referral for physical therapy.

C. MRI evaluation of the mass.

The correct answer is “B.” Patients with congenital muscular torticollis have tightness within the sternocleidomastoid muscle thought to be secondary to in utero positioning. This muscle tightness results in a tilt of the head toward the side of tightening and rotation to the contralateral side. Presentation is typically between 2 weeks and 2 months of life. Initially, treatment with modification of the home environment is appropriate. If there is no improvement over 2 to 4 months, then referral to physical therapy is most appropriate. Occasionally infants will have a palpable mass within the sternocleidomastoid muscle; the etiology of this “tumor” is unknown, but since it appears fibrotic on microscopic analysis, theories include arterial occlusion or venous congestion from in utero positioning causing avascularity of the muscle or potentially even primary fibrosis of the muscle. Ultrasound, not MRI, is the preferred initial imaging modality as the mass is in proximity to the skin surface and this modality does not require sedation. Ultrasound should reveal a heterogeneous mass within the sternocleidomastoid muscle; MRI might be warranted if there was an atypical appearance on ultrasound. Presence of a “tumor” may suggest decreased response to physical therapy, but since surgical release of the sternocleidomastoid typically does not occur until after 1 year of age, referral to orthopedics is usually not necessary unless the infant fails to improve with physical therapy over 2 to 4 months. Plagiocephaly often occurs in the presence of torticollis, and cranial remolding orthoses are a consideration, but it can often be prevented with proper physical therapy and resolution of the torticollis. 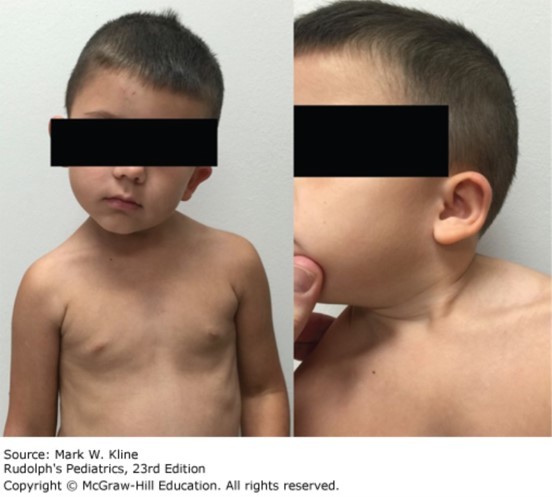 A 4-month-old boy with torticollis returns to clinic for a well-child check.