His parents have no major concerns. He is afebrile, his heart rate is 168 bpm, and his respiratory rate is 68 breaths per minute. He has gained 7 g/day since you saw him last at 1 month. On exam, he has a grade II/VI systolic ejection murmur and his liver is palpated 3 cm below the costal margin. You obtain a chest X-ray. The heart looks like a snowman. He does not appear cyanotic, but you ask the nurse to check his oxygen saturation (Spo2).

What is the most likely Spo2 you will obtain?

The correct answer is “B.” The child you see is showing clinical signs of volume overload heart failure. He has had poor weight gain and is mildly tachycardic as well as tachypneic. He also has hepatomegaly on exam as well as cardiomegaly by chest X-ray. No significant pulmonary edema is noted on the chest X-ray. Two months of age is common timing for a left-to-right shunt to appear clinically. After birth, pulmonary vascular resistance drops significantly compared to that in utero, and it continues to decrease for the first 6 weeks of life before reaching normal levels. As the pulmonary vascular resistance decreases, there is an increase in the amount of left-to-right shunting, leading to symptoms of volume overload heart failure, which are very rarely present at birth. The most common congenital heart disease to present in this way is a ventricular septal defect (VSD). A hemodynamically significant VSD would cause many of the findings that were noted in this infant. Normal oxygen saturations would be expected with a VSD; but the murmur would be a holosystolic murmur rather than an ejection-type murmur. While there would be cardiomegaly on chest X-ray, you would not expect to see a “snowman sign.” Total anomalous pulmonary venous return (TAPVR) can also be relatively asymptomatic in the neonatal period, especially if the pulmonary venous return is unobstructed. Once the pulmonary vascular resistance has dropped, these children develop similar symptoms of heart failure. The murmur in this anatomy results from a pulmonary outflow murmur related to increased volume of blood. This would present as an ejection-type murmur. A “snowman sign” on chest X-ray is classic for supracardiac TAPVR with the pulmonary veins returning to the innominate vein. These children do not appear clinically cyanotic, but when their oxygen saturation is checked, it is lower than normal given the right-to-left shunt across the atrial septum. They are not usually significantly hypoxic (SpO2 < 80%) unless there is some obstruction to pulmonary venous return. There are multiple types of TAPVR. Supracardiac TAPVR occurs when the anomalous pulmonary veins drain above the heart. (See Figure 5–1.) Commonly, all the veins come together into a confluence posterior to the left atrium. This confluence then drains superiorly through a vertical vein into the innominate vein. The oxygenated blood then enters the heart through the superior vena cava (SVC) into the right atrium. Intracardiac TAPVR occurs when the anomalous veins drain into a confluence that enters the heart through the coronary sinus. This then empties the oxygenated blood into the right atrium. Infracardiac TAPVR occurs when the veins come together into a confluence posterior to the left atrium. Rather than draining superiorly through a vertical vein, the confluence drains through a vein inferiorly, through the diaphragm, and empties into the hepatic vasculature. The oxygenated blood returns to the heart through the inferior vena cava (IVC) into the right atrium. There can also be a mixture of these three types of pulmonary venous return. The severity of presentation of TAPVR is related to any obstruction to pulmonary venous return that can occur at the individual veins, confluence, vertical veins, or atrial septum. Infracardiac TAPVR almost always has some degree of obstruction and requires prompt surgical repair. Patients with severe obstruction present with significant hypoxia and a white-out chest X-ray secondary to pulmonary edema. 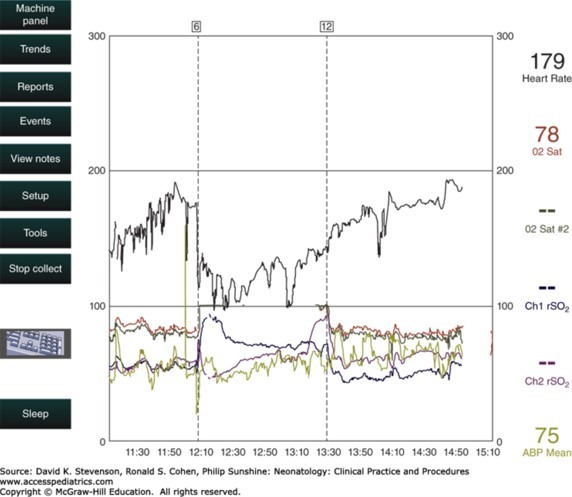 A 2-month-old previously healthy boy presents to your clinic for a well-child visit.