A mother is admitted into labor and delivery with a 1-day history of dysuria, fevers to 38.9°C (102°F), and now active contractions every 2 to 3 minutes for about 1 hour.
Leah Carton
Associate Editor - Pediatrics, Dermatology, Geriatrics , McGraw Hill
Follow

Her fetus has an estimated gestational age of 24-3/7 weeks based on last menstrual period (LMP) and a concordant 8-week ultrasound. The mother had regular prenatal care and an uncomplicated pregnancy until now. On exam, the physician notes that the mother’s cervix is dilated to 8 cm with a bulging bag of water. She then has spontaneous rupture of membranes with green-colored, foul-smelling fluid. She rapidly delivers a 575-g male infant prior to maternal administration of betamethasone. The NICU team is present at the delivery.

Which of these statements is accurate about this infant?

A. The Apgar score can be used to reliably predict asphyxia in a very preterm infant.

C. The Apgar score can be affected by maternal sedation or analgesia as well as neurologic conditions such as muscle disease or cerebral malformations.

E. None of the above.

The correct answer is “C.” The Apgar score is composed of five components—heart rate, respiratory effort, tone, reflex irritability, and color—each of which can be given a score of 0, 1, or 2. Hopefully you remember this from earlier. The scoring provides consistent shorthand for reporting the state of the infant and effectiveness of resuscitation. It is important to recognize, however, that elements of the score, including tone, color, and reflex irritability, are partially dependent on the physiologic maturity of the infant. Thus, normal preterm infants may receive a lower score because of immaturity without evidence of asphyxia. Maternal sedation, neurologic conditions, and cardiorespiratory conditions that interfere with heart rate or tone may alter the Apgar score. 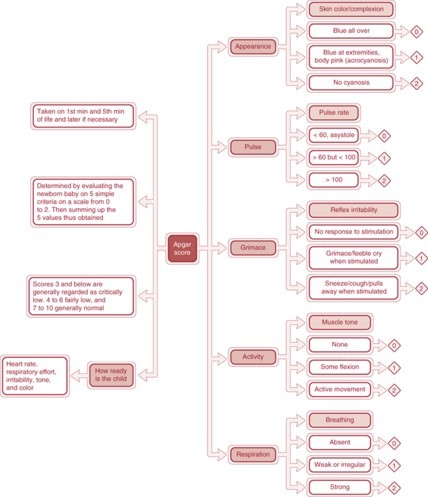 A mother is admitted into labor and delivery with a 1-day history of dysuria, fevers to 38.9°C (102°F), and now active contractions every 2 to 3 minutes for about 1 hour.