His parents think he may have attained 6 to 10 words. He walks fairly well but does tend to trip and fall. When he falls he gets up right away and carries on with his activities. He eats a varied diet without any restrictions. Their main concern today is that he looks “bowlegged,” especially when ambulating. The father reports that he, too, was a bit bowlegged when he was young but did not receive treatment and “grew out of it.” Exam demonstrates mild genu varum, which clinically appears symmetric. Gait demonstrates a wider base, with toes pointing to the midline bilaterally (L > R), and no lateral thrust, waddling, or antalgia. X-rays demonstrate mild genu varum bilaterally affecting the femur and the tibia, with normal-appearing physes.

Which of the following statements is/are consistent with the patient’s condition?

A. History of delayed walking is common.

B. Maximal deformity is noted around 3 years old.

E. All of the above

The correct answer is “C.” Genu varum and genu valgum are angular variations in alignment, which occur naturally at defined points in development. Each of these angular variations, although part of normal development, can be pathologic. Thus, it is important to be able to differentiate physiologic from pathologic findings. Maximal genu varum occurs between birth and 6 months of age, with a femoral-tibial angle between 10 and 15 degrees. Remodeling occurs naturally, and neutral alignment is typically attained by 15 months of age. The differential diagnosis for persistent genu varum beyond 15 months of age includes physiologic genu varum, tibia vara (early-onset Blount disease), metabolic bone disease, skeletal dysplasia, focal fibrocartilage dysplasia, and growth arrest. Standing AP films of the bilateral lower extremities are helpful in assessing for physiologic versus pathologic causes of genu varum. X-rays are indicated in children with genu varum outside the expected physiologic age range, unilateral deformity or significant asymmetry, pronounced deformity, short stature, or a lateral thrust on exam. Images should be obtained with the patella in a neutral position (pointing straight ahead). Physiologic genu varum is defined as persistent varus beyond 18 months of age, with femoral-tibial angle greater than 10 degrees, and without radiographic findings of other abnormalities. It is characterized by a varus angulation of the entire lower extremity, distributed through the femur and tibia. It is often bilateral but can be asymmetric. Patients often have a history of early independent ambulation. There may be a family history of relatives who were “bowlegged.” On exam the genu varum is apparent on inspection. Gait exam often reveals an agile walker with an intoed gait. Internal tibial torsion is also commonly associated with physiologic genu varum. Physiologic genu varum spontaneously resolves by around 2 years of age. Braces and splints have not been shown to be effective in altering the natural course. Referral to orthopedics should be considered when there is concern for pathologic genu varum; that is, severe deformity, unilateral or significant asymmetry, progression of the deformity, pathologic findings on X-ray, or persistence of the deformity beyond 2 years of age. Tibia vara, or early-onset Blount disease (previously infantile Blount disease), is characterized by abnormal endochondral ossification of the medial proximal tibia. This results in varus angulation and medial rotation of the proximal tibia. The etiology is unknown as the disorder is rare, especially in comparison with physiologic varus. It is more common in the African American population and in obese or overweight toddlers. Patients often have a history of early independent ambulation. Similar to physiologic genu varum, it is often bilateral and also commonly associated with internal tibial torsion. On exam, genu varum is evident on inspection. Gait exam may reveal a lateral thrust (knee thrusts laterally through stance phase), indicating concern for lateral subluxation of the femur on the tibia or ligamentous laxity. On X-rays, it is characterized by varus deformity of the proximal medial tibia. In children younger than 18 months of age, differentiating between physiologic genu varum and tibia vara can be difficult, even with X-rays. Treatment of early-onset Blount disease depends on the age of the patient and the severity of deformity. Bracing may be an option in patients 2 to 3 years old, so patients should be referred to an orthopedic physician for management. 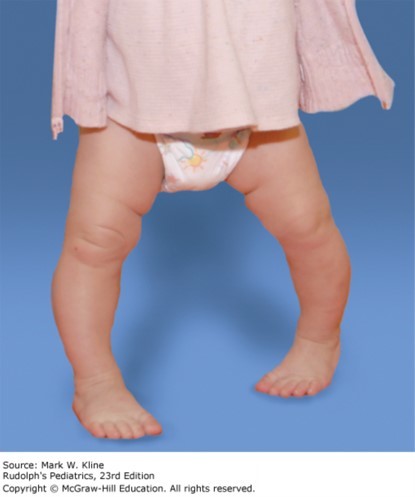 An 18-month-old boy presents for his well-child check.