A 2-day-old healthy full-term Caucasian boy presents with papules and pustules and surrounding erythema on the face, trunk, and extremities. The parents report that the bumps were not present at birth.

What is the most likely diagnosis?

The correct answer is “A.” Erythema toxicum neonatorum is a common disorder, occurring in up to 70% of healthy full-term Caucasian newborns characterized by pustules on an erythematous base. Rarely present at birth, it occurs most commonly in the first 3 to 4 days of life, and can last up to approximately 2 weeks. The lesions may involve the trunk, extremities, or face but spare the palms and soles. (See Figure 33–16.) Transient neonatal pustular melanosis (TNPM) occurs in less than 1% of newborns, most commonly in black infants. It presents at birth with pustules that heal with a collarette of scale surrounding hyperpigmented macules. The palms and soles may be involved. This hyperpigmented macule resolves over weeks to months. (See Figure 33–17.) Neonatal acne, now referred to as neonatal cephalic pustulosis, is not due to androgen stimulation of the oil glands, as occurs in infantile acne (usually developing at 3 months of life). Papules and pustules are confined to the face and develop at age 3 weeks or older. Neonatal herpes is one not to miss. In utero infection with lesions at birth is rare. Typical onset is at 2 weeks of life with the development of weak vesicles on an erythematous base that cluster and coalesce. Neonatal impetigo is a superficial bacterial infection of the skin that can occur in the first few days to 2 weeks of life. It presents clinically as vesicles, pustules, or bullae on an erythematous base. These areas rupture easily and leave superficial erosions and crusting. Common locations of involvement are the skinfolds, such as the neck fold, axilla, and diaper regions. 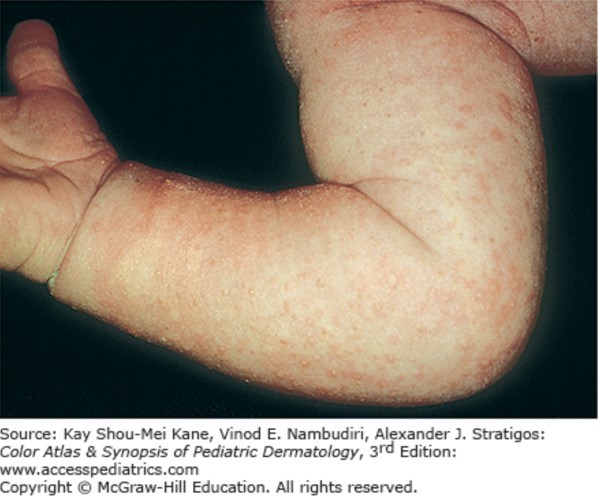 A 2-day-old healthy full-term Caucasian boy presents with papules and pustules and surrounding erythema on the face, trunk, and extremities.