A patient that presents with Vestibular Neuritis
Eric Shamus, DPT, PhD
Professor, Chair of Department of Rehabilitation Sciences, Florida Gulf Coast University
Follow
Like Be the first to like this
0

Scenario: A 44-year-old woman was referred to physical therapy secondary to insidious episodes of severe vestibular symptoms. She reports that she often feels like things in her vision are “jumping up and down” and she feels like she is spinning when she looks up. The symptoms don’t subside right away when she stops looking up but rather take several days to lessen. When she doesn’t feel like she is spinning, she feels somewhat disoriented and off-balance and has had several episodes of “near falls.” She has not been treated with any antibiotics in several years, nor has she experienced any injury to her head. She does not have any change in her hearing. In addition to the sensations of moving and spinning, she has been forced to stop driving because she struggles to read signs and to turn her head quickly enough to drive safely.

Question: Which of these tests is most important for ruling in vestibular neuritis?

The Weber-Rinne Tests should be negative, as hearing is not affected with vestibular neuritis.

The cervical spine special tests to rule out red flags such as Sharp Purser and Alar ligament tests should all be negative, as vestibular neuritis does not typically include cervical instability.

The saccades test should be negative as eyes should continue to move simultaneously and normally from finger to nose.

Other important diagnostic findings include absent vestibulo-ocular reflex on the involved side, difficulties with horizontal head turns during gait assessment, and spontaneous horizontal-rotatory nystagmus that beats towards the uninvolved side.

The reciprocal push–pull interaction of the two labyrinths is disrupted after acute peripheral labyrinthine injury. For example, following the acute loss of right unilateral peripheral vestibular function, there is a loss of resting neural activity in the right vestibular nerve and right vestibular nuclei. Because the brain normally detects differences in activity between the two vestibular nuclear complexes, even when stationary the imbalance in neural activity is interpreted as a rapid head movement, in this case to the left. (From McKean SC, Ross JJ, Dressler DD, Brotman DJ, Ginsberg JSeds. Principles and Practice of Hospital Medicine. http://www.accessmedicine.com. Copyright © The McGraw-Hill Companies, Inc. All rights reserved.) 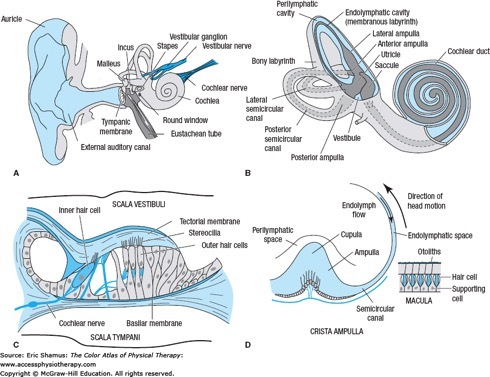 A patient that presents with Vestibular Neuritis