[Editor's note: The following tribute to Dr. Schwartz was written by Leslie Orr, Senior Science Writer at the University of Rochester Medical Center]

As one of the most distinguished surgeons in America, Seymour I. Schwartz, M.D., edited and co-wrote the textbook used to teach generations of young doctors and led the surgical societies that shaped the profession. He also remained influential well into his oldest years by continuing to write, teach, and to commit his time to physicians in Rochester and across the globe, who honored him as a national “icon” in 2017. Schwartz, 92, died August 28, 2020, at the home of his son in St. Louis, Mo.

His storied career began at the University of Rochester in 1950, when he arrived for a surgical residency. He finished residency in 1957 after a 20-month leave to serve in the U.S. Navy during the Korean War, and then joined the surgical faculty. For the next 60 years he cultivated expertise in hepatobiliary surgery and other complex operations and rose through the ranks of academic medicine, both inside and outside the UR. He served as chair of Surgery from 1987 to 1998, and director of Surgical Research for 20 years.

Most notably, however, Schwartz also edited and co-authored the standard textbook for the profession, Schwartz’s Principles of Surgery, during the years that his own career was advancing. The first edition of the book — 1,850 pages, 52 chapters, and written in a single voice — is known as “the surgeon’s Bible” and was unique for being rooted in basic science. McGraw-Hill first published it in 1969 and it is now in its 11th edition.

“Holding the Seymour Schwartz Distinguished Professorship in Surgery is the most important honor any surgeon could receive,” said David Linehan, M.D., Chair of Surgery. “For leaders in our field, Sy is the aspirational mentor that we all want to emulate. His towering intellect, spirit of collegiality, indefatigable work ethic, unending curiosity and enduring relevance set the bar so high. We may never achieve his heights, but based on his embodiment of excellence, we will all keep trying. As a department, we are so saddened by his loss, but we find comfort in knowing that his remarkable legacy spans the globe and lives on.”

Schwartz retired from the operating room at age 72. He once said that his longevity was thanks to exercise and an ability to keep working in other capacities. On most days, including many Saturdays, for the 20 years after his “retirement,” Schwartz could be found in his timeworn office, a home-away-from-home on the second floor of the UR Medical Center, often writing and reading. Colleagues would filter in to glean information from his vast experience and intellect. They joked that their brilliant mentor had “flunked” retirement.

Recent years were filled with accolades, including the University’s Eastman Medal, which he received in 2018, and a glowing profile in the Democrat & Chronicle.

“When the American College of Surgeons honored Dr. Schwartz as an ‘Icon of Surgery’ in 2017, they provided yet another national affirmation of what we here at URMC have always known,” said Mark Taubman, M.D., CEO of URMC. “Dr. Schwartz was quite simply a giant in both his field and in the life of our institution, where he was an approachable, gracious and insightful guide to generations of physicians who drew on the deep experience and knowledge that he so willingly shared. I count myself among those he mentored, and he was also a great and supportive friend to my wife Lois and me. We will miss him dearly!”

Schwartz is remembered fondly by those who worked with him at all stages of his life. He was an important catalyst in the career of Craig Smith, M.D., who trained as a surgical resident at URMC and went on to become chair of Surgery at New York-Presbyterian Hospital/Columbia University Medical Center.

Schwartz and Smith co-authored several papers during Smith's research gap year in the late 1970s, and as a mentor Schwartz was "very outspoken, candid, and just so intelligent that it was always worth it," Smith said. As Smith built his career at Columbia they stayed in touch, and Smith visited Dr. Schwartz in Rochester a couple of years ago. "He was just a very multi-talented person," Smith said, "and sharp as a tack."

In addition to his medical career, Schwartz was a history buff and collector of rare maps, some of which now reside in the Dr. Ruth W. Schwartz and Dr. Seymour I. Schwartz Collection in the Department of Rare Books, Special Collections, and Preservation on the River Campus. He became an accordion player after winning the instrument in a poker game while in the Navy, wrote lyrics for the UR School of Medicine and Dentistry’s annual student musical production, and composed special limericks for each graduate of the surgical residency program. He was an accomplished and prolific author and an international expert on the mapping of the New World.

“Dr. Schwartz began his career in an era when the most common way to diagnose a surgical problem of any kind was via an operation,” said Michael F. Rotondo, M.D., CEO of URMFG and Vice Dean for Clinical Operations in the School of Medicine. “During his 70-year career he drove innovation that literally shaped the field of surgery and the practices of countless surgeons. Through his significant contributions and teaching, the care of patients across the globe was dramatically improved. To the very end, he remained intensely curious, current and vital, adding value at every turn to the benefit of the University of Rochester, the medical center and his profession.”

In his later years, Schwartz became more deeply interested in the humanities and was committed to capturing the best things about the practice of medicine. He was fascinated by physicians who had become literary figures, and he profiled some of the nation’s finest in a book called “From Medicine to Manuscript,” published in 2018. It features essays and biographies on exceptional talents such as Oliver Sacks (whom Schwartz interviewed before Sacks died), Khaled Hosseini, Atul Gawande, Tess Gerritsen, and Abraham Verghese.

Verghese, when contacted for the Democrat & Chronicle article about Schwartz in 2018, praised the surgeon for his graciousness, generosity, and huge impact.

“Dr. Schwartz had a remarkable effect on my life, considering I’m not a surgeon,” Verghese said at the time. “It came by virtue of his iconic textbook on surgery. Such books shape the consciousness of so many young physicians, and his was so important to me that I mentioned it in my novel, Cutting for Stone, as one of the two books that the medical student protagonist takes when he flees anarchy in Ethiopia.”

Schwartz came from a humble background. The son of Jewish immigrants, he grew up in the Bronx and attended public schools. Yale University admitted Schwartz for undergraduate studies but he could not afford to go there. Instead, he attended the University of Wisconsin on a scholarship, completed his degree in just two years, and then went on to medical school, earning a degree at New York University.

Professional achievements aside, Schwartz once said that his “biggest contribution in life was his family.” He has three sons, Richard, director of aviation operations at Enterprise Rent-A-Car; Kenneth, founding director of the Phyllis Taylor Center for Social Innovation and Design Thinking at Tulane University; and David, M.D./Ph.D., a cardiologist and associate professor at Washington University School of Medicine. His wife, Ruth, who died in 1999, was a pioneer in obstetrics and gynecology, and delivered their first two grandchildren. They married while in medical school and then moved to Rochester together as interns and chose to stay.

Ruth introduced her husband to cartography when she thought he needed a hobby early in his medical career. It became a lifelong passion. In 1963 she bought him his first cartography book for 50 cents from a second-hand store. He became an avid collector of rare and historically significant maps, and also wrote six books on the subject, declaring during an interview in 2017 that that he had “developed a life of schizoid scholarship.” He served on the Board of Trustees of the Museum of American History, the Smithsonian Institution, and was a member of the Advisory Board of the Geography and Map Division of the Library of Congress.

In addition to his beloved sons and grandchildren, Schwartz is survived by his sister, Lynn Rosen, Ed.D., of Rochester, and devoted companion, Lyn Kayser, also of Rochester. A memorial service is being arranged for a later date.

To learn more, view the video tribute URMC produced in 2017 when Schwartz was honored by the American College of Surgeons.

People across URMC and beyond are sharing their memories of Seymour Schwartz, M.D. Here are some of their thoughts:

“The medical community has lost a great surgical leader—generations of surgeons have benefited from his teachings, whether the knowledge was imparted at the bedside, in the OR, in conference rooms or from the pages of his iconic textbook. He was a pioneering liver surgeon, a Renaissance man in every meaning and a caring and trusted friend and colleague.”
-- John Fung, M.D., Ph.D., professor of Surgery at the University of Chicago, who worked with Schwartz as a URMC resident in the 1980s

“Dr. Schwartz hired me in my first job as a Nurse Practitioner in 1990, and I worked with him until he retired. He was remarkable—he was my friend, he was my mentor, he was like a father. I saw many times how he put his patients at ease; if one of them said, ‘I’m so scared, I’m so nervous,” he’d say, “That’s OK: I’m not!” And then we’d go to national conferences, and I’d see how revered he was around the world. He was truly a Renaissance man.”
--Ellen Schmidt, N.P. 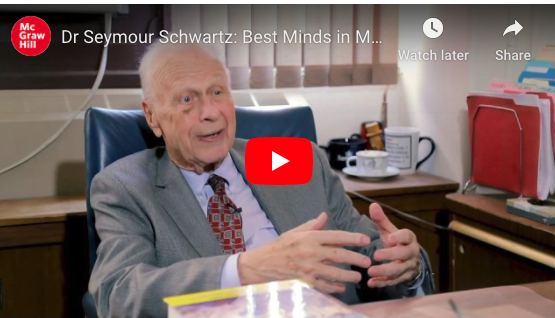