A question on a patient that presents with Sesamoiditis
Eric Shamus, DPT, PhD
Professor, Chair of Department of Rehabilitation Sciences, Florida Gulf Coast University
Follow
Like

Scenario: Patient is a 56-year-old plumber. Two weeks ago he was working in a tight area under the sink and had his ankle dorsiflexed with all of the weight on his forefoot. The toes were all into extension. When he stood up he had pain under his big toe from what he described as an over stretching. He tried to put some ice on his foot. He presents with decreased motion at the first metatarsophalangeal (MTP) joint with swelling. He is having difficulty pushing off on the foot when trying to go up the ladder. Upon palpation he is point tenderness at the flexor hallicus longus and both sesamoids.

Question: What are some common gait alterations seen with these symptoms?

A. Decreased push off, Increased supination and external rotation of the foot, forefoot abduction and lateral whip.

B. Decreased push off, Increased pronation and external rotation of the foot, forefoot adduction.

Answer with rationale: A. Decreased push off because of the discomfort of pressure under the big toe. Increased supination and external rotation of the foot, forefoot abduction and lateral whip. These alterations come from the attempt to release pressure on the great toe and normalize the gait pattern.

For more information see Chapter 213: Sesamoiditis in The Color Atlas of Physical Therapy 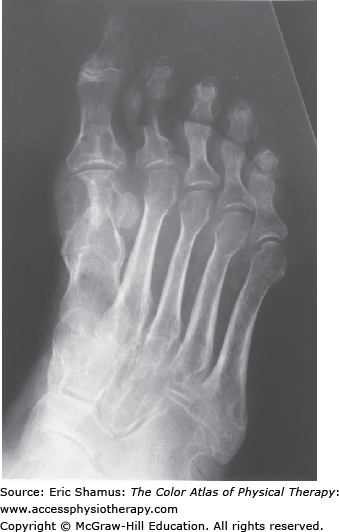 A question on a patient that presents with Sesamoiditis