A home health physical therapist sees a 51-year-old man who is transitioning from moderate to severe Amyotrophic Lateral Sclerosis (ALS). Following examination the physical therapist determines that he is no longer capable of safe ambulation; he tolerates sitting upright but only with full support. He reports he is having increased difficulty with his coughing and his chest feels heavy. His caregiver is getting increasingly concerned about his skin and would like advice on how to manage him better. Presently he is able to communicate verbally, but the activity is fatiguing and his oxygen saturation drops to 83% during conversation. On muscle testing he demonstrates gross strength of 2+/5 in bilateral upper extremities and 3/5 in bilateral lower extremities. Sensation is intact.

Question: What stage of progression is this patient’s ALS, and what level of exercise would be most appropriate for their plan of care?

Answer with rationale: Mid stage. Low intensity strengthening and ROM exercises for upper extremities and moderate intensity for lower extremities. Mid stage most likely because the patient’s muscle weakness is prevalent in multiple sections of the body, rather than one specified area. For this patient, his weakness and atrophy likely began in the hands and arms, and spread into the trunk, legs and feet. Another sign of mid stage versus early stage is the presence of breathing and speaking difficulties. These problems have not usually developed during early stage ALS, and are much more advanced (such as requiring mechanical assistance) during late stage ALS. The upper extremities should only be trained at low intensity exercise due to the 2+/5 results from the manual muscle test. This low score suggests that these muscles are at higher risk for damage from overuse or misuse due to their weakened state or potential innervation issues. The lower extremities should be trained at moderate intensity exercise due to the 3/5 results from the manual muscle test. This score suggests that while these muscles are still stronger than those of the upper extremity, they should still be treated with some caution. Potential damage from overuse or misuse still exists, but they can be loaded more safely than the arms. 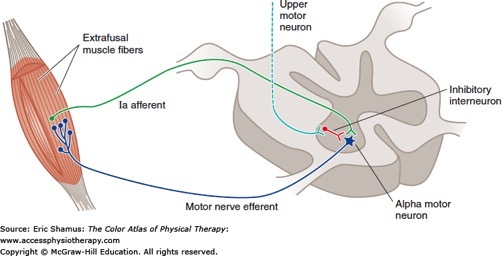 Clinical presentation of a patient with Amyotrophic Lateral Sclerosis