Following a 4-month hospitalization in the NICU, he is discharged at 39-5/7 weeks’ corrected gestational age. The infant is feeding well by mouth on fortified maternal breastmilk. He is discharged home on supplemental oxygen at a rate of 1/8 L/min.

Which statement is true regarding this infant’s lung disease?

A. This infant has chronic lung disease of prematurity (bronchopulmonary dysplasia) confirmed by the need for supplemental oxygen beyond 36 weeks’ gestational age.

B. This infant’s lungs were likely in the canalicular stage of development at the time of birth.

C. This infant’s lungs are likely between saccular and alveolar stages of development at the time of discharge.

D. Vitamin A and caffeine are two medications that have been shown to decrease the severity of lung disease of this type.

E. All of the above.

The correct answer is “E.” This infant has chronic lung disease of prematurity, also known as bronchopulmonary dysplasia. This disease is most common in infants at the extremes of viability around 23 to 25 weeks’ gestation at birth. It is generally defined as the persistent need for oxygen therapy at 36 weeks’ corrected gestational age. The fetal lungs go through expected maturation from lung bud to pseudoglandular to canalicular to saccular to alveolar. Preterm infants lack alveolarization until several months of age, adding to difficulties with ventilation and oxygenation. Both vitamin A and caffeine produce modest improvements in chronic lung disease and are administered to many preterm infants. 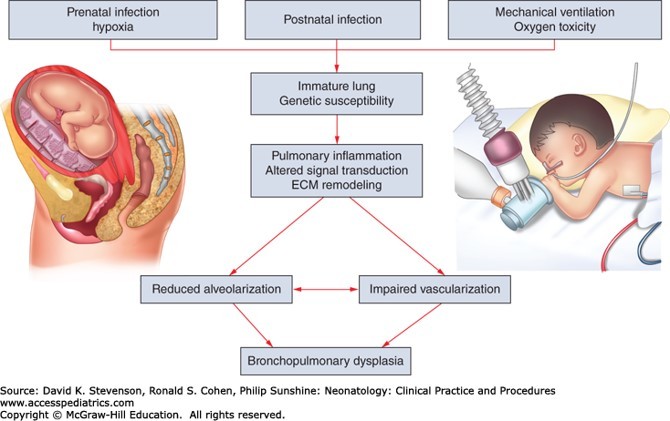 A male infant is born at 24 weeks’ gestational age after his mother experiences preterm labor.