AccessMedicine's Image of the Week: Neuropathology of Parkinson Disease

Idiopathic Parkinson disease. A, The brainstem on the left side of the image has a pale substantia nigra compared to the age-matched control on the right side of the image. A grossly pale substantia nigra is characteristic of Parkinson disease, and is caused by a selective loss of pigmented dopamine-secreting neurons in this nucleus. The well-circumscribed defects near the substantia nigra in the brainstem on the right side are artifacts, due to early decomposition and gas formation. B, The neuron in the center of the image has several Lewy bodies, visible in this section as basophilic homogeneous cytoplasmic inclusions surrounded by a clear halo (arrow). Lewy bodies are the hallmark of Parkinson disease, and are rich in a protein known as α-synuclein. Hematoxylin and eosin, 400×. 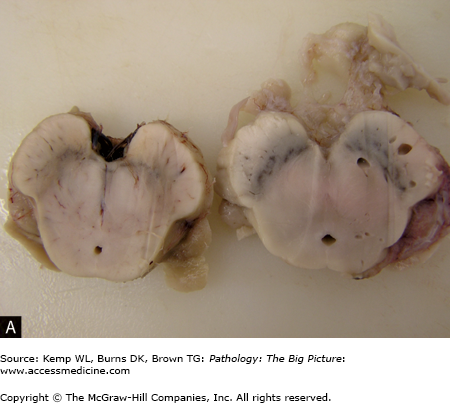 AccessMedicine's Image of the Week: Neuropathology of Parkinson Disease