A 2-year-old boy is brought to your clinic for evaluation after an episode of painless gross hematuria.
Leah Carton
Associate Editor - Pediatrics, Dermatology, Geriatrics , McGraw Hill
Follow
Like

His mother reports that he had a red-tinged void in his diaper last night, although his void this morning was normal colored. The patient is otherwise healthy, on no medications, and appears to be in no pain. His physical examination reveals a painless, left-sided abdominal mass palpated toward the flank, which does not move with respiration. Urinalysis in clinic today reveals trace heme and no red blood cells. You decide to order an abdominal ultrasound to evaluate the mass further.

Which is the most likely diagnosis?

The correct answer is “A.” Painless gross hematuria in a toddler or preschool-aged child, even when intermittent, is highly suspicious for Wilms tumor (WT). A newly-identified abdominal mass is often palpated, and sometimes is the only finding, incidental on a well-child visit, that identifies this tumor. Because the tumor is not adjacent to the diaphragm, it does not move with respirations as an enlarged spleen does (making option “C” incorrect). Associated symptoms for WT are based on mass effect and may include constipation (constant or intermittent) and bladder dysfunction. Staging workup includes CT scan of the chest, abdomen, and pelvis; local extension and distant metastasis—often to the lungs—are both hallmarks of this disease. Therapy includes upfront resection of the affected kidney, followed by chemotherapy and radiation therapy dictated by stage. Cure rates for the most common forms of WT are excellent, well above 90%. Distinguishing WT from neuroblastoma (option “B”), another frequently encountered abdominopelvic tumor in the same age range, is not reliably done by physical exam or ultrasound. CT scan may be helpful, as neuroblastoma tends to exhibit calcifications, while WT arises within the kidney and pushes renal parenchyma toward the capsule. (See Figure 4–2.) Tissue diagnosis is required to be certain. Rhabdomyosarcoma (RMS; option “E”) is a soft tissue sarcoma that may arise in nearly any tissue of the body. In boys, it is frequently found arising from the prostate or bladder, which would be unexpected to exhibit a flank mass if involving the midline urogenital system. RMS is also less common overall than WT. Finally, while pyelonephritis (option “D”) may exhibit renal complications, the overall well appearance of the child and presence of a mass are not consistent with this diagnosis. 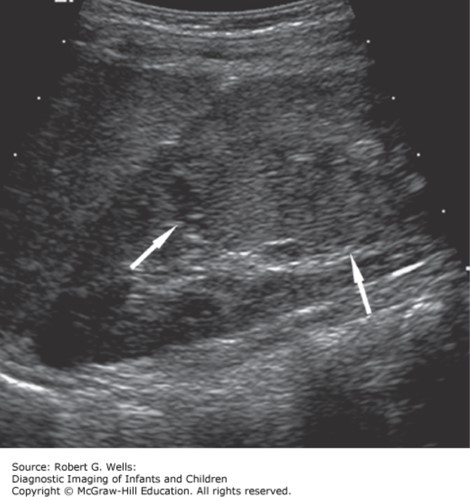 A 2-year-old boy is brought to your clinic for evaluation after an episode of painless gross hematuria.