The United States Breastfeeding Committee (USBC) annually honors national breastfeeding month in August, as declared by the organization in August 2011. According to the USBC website, USBC hosts an advocacy campaign inviting breastfeeding coalitions, member and partner organizations, as well as other supporters to build a "landscape of breastfeeding support." Breastfeeding is particularly important for mothers and their newborn babies, as noted in the newly revised Breastfeeding chapter of Rudolph's Pediatrics, 23rd edition.

A deeper look at Rudolph's Pediatrics, 23rd edition, Chapter 16: Breastfeeding, reveals the breastfeeding guidelines set forth by the American Academy of Pediatrics (AAP):

The American Academy of Pediatrics (AAP) recommends that children be exclusively breastfed for approximately the first 6 months of life, followed by continued breastfeeding as complementary foods are introduced for 1 year or longer as mutually desired by the mother and infant. The World Health Organization’s (WHO) growth standards reflect the growth of breastfed infants and are now commonly used to plot the growth of infants and young children.

According to Chapter 16: Breastfeeding, "breast milk is a complex biologic fluid with nutrients that support the growth and development of infants as well as the health of the mother. It contains all the nutrients necessary for infant survival during the first 4 to 6 months of life, including fat, protein, carbohydrates, vitamins (with the exception of vitamin K in the postpartum period and then vitamin D), minerals, and water."

Apart from breast milk, other specific nutrients help aid newborn babies in their growth. Take a look at Figure 11-2 from Neonatology: Clinical Practice and Procedures below: 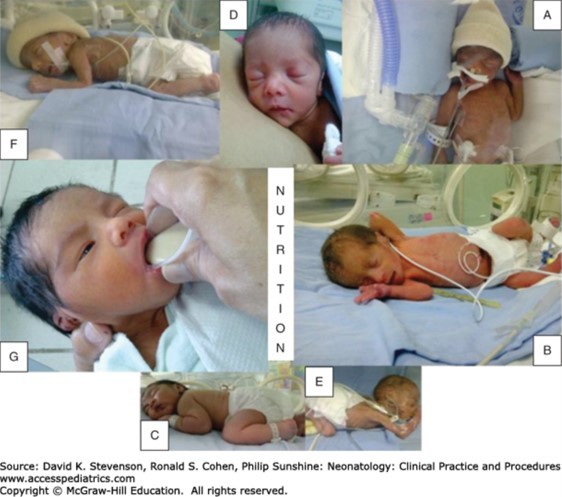