​A 2-year-old boy is brought to your clinic for evaluation after an episode of painless gross hematuria.
Andrew Moyer
Follow
Like

His mother reports that he had a red-tinged void in his diaper last night, although his void this morning was normal colored. The patient is otherwise healthy, on no medications, and appears to be in no pain. His physical examination reveals a painless, left-sided abdominal mass palpated toward the flank, which does not move with respiration. Urinalysis in clinic today reveals trace heme and no red blood cells. You decide to order an abdominal ultrasound to evaluate the mass further and eventually arrive at a diagnosis of Wilms tumor (WT).

What is a potential complication of Wilms tumor?

A. Tumor rupture with internal hemorrhage

The correct answer is A. Tumor rupture with internal hemorrhage. Because WT arises within the kidney capsule, as it grows the risk of tumor rupture increases. Rupture may be caused by minimal trauma, such as falling forward while running, as toddlers often do. Ruptured WT may become a life-threatening condition due to internal blood loss, although these tumors often bleed into the retroperitoneum and auto-tamponade limits the quantity of blood loss. Nevertheless, this presents a significantly greater surgical bleeding risk when the tumor is resected. Tumor rupture also seeds the abdomen, which upstages the cancer and leads to therapy with more intensive chemotherapy and a wider radiation field.

Wilms tumor. In this axial computed tomography image of the abdomen, there is a large encapsulated mass noted within the lower pole of the left kidney. The mass has no evidence of local infiltration or calcifications. Renal parenchyma, shown by contrast uptake, is pushed aside by the tumor, suggesting an intrinsic renal process. The left kidney remnant appears to be grasping or engulfing the lower-attenuation tumor, a finding sometimes described as a “claw sign.” (Used with permission from Adam D. Wolfe, MD, PhD.)

Motor Control of the Face 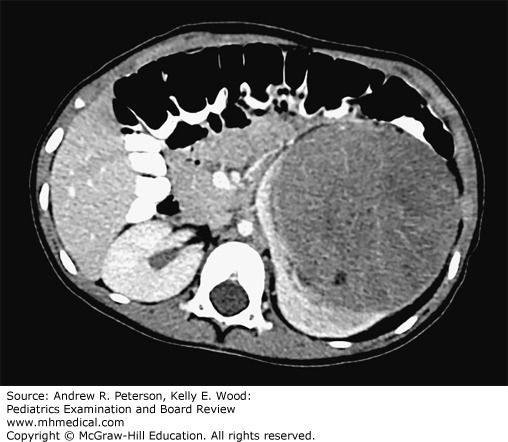 ​A 2-year-old boy is brought to your clinic for evaluation after an episode of painless gross hematuria.