Scenario: A 42-year-old female has come to the physical therapy out-patient clinic for an evaluation of her right upper extremity. As a part of her initial history, the patient states that she is a police officer and an amateur bodybuilder. The patient states that the pain in her arm started suddenly and was noticeable when turning the ignition key of her police cruiser. She points to pain along the lateral aspect of her right elbow. She has point tenderness with palpation of area with increased pain in elbow with wrist and elbow extension. Imaging radiographs are normal. Physical inspection reveals that rubor and warmth are present in the muscle bellies of extensor digitorum and extensor carpi radialis longus.

Question: All of these tests are appropriate to rule in lateral epicondylitis as a diagnosis except? 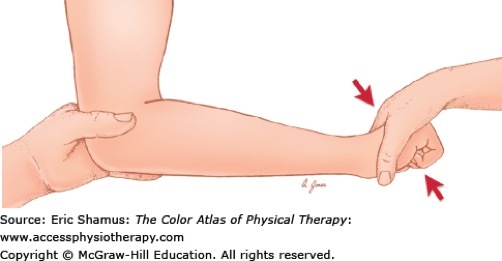 Presentation of a patient with lateral epicondylitis