A mother brings her 7-year-old boy with trisomy 21 and moderate intellectual disability (ID) to the clinic because she is concerned that he may also have an ASD.

A mother brings her 7-year-old boy with trisomy 21 and moderate intellectual disability (ID) to the clinic because she is concerned that he may also have an ASD. She reports that he rarely initiates social interactions with adults or other children, has delayed speech, does not engage in imaginative play, flaps his hands, has an unusually high pain tolerance, and becomes agitated when there are changes to familiar routines.

What percentage of individuals with ASD have co-occurring ID?

The correct answer is “D.” Substantial overlap exists between the symptoms of ASD and ID and approximately 60% to 70% of individuals with ASD also have a comorbid ID. Of note, reported rates of ID in the ASD population have varied considerably across studies, likely due to differences in methodology and inclusion criteria for ID and ASD. Adaptive functioning (necessary to live independently and interact socially) is often lower than cognitive performance for people with comorbid ASD and ID. Individuals with ASD and ID may be at greater risk of engaging in challenging behaviors such as aggression and self-injury, and having more psychiatric complications such as anxiety, schizophrenia, and ADHD, compared with those who have ID alone. Particularly for children who are very young or who present with significant intellectual impairment (severe to profound ID), it can be difficult to determine whether social difficulties, communication delays, and repetitive and rigid behaviors are due solely to the cognitive impairment or are better accounted for by the additional presence of ASD. Identification of comorbid ID in a child with ASD is important because different interventions are indicated to address learning and adaptive needs. From an outcome perspective, the presence of ID and language impairments in individuals with ASD is often predictive of response to treatment, as children with stronger cognitive abilities generally make greater progress. 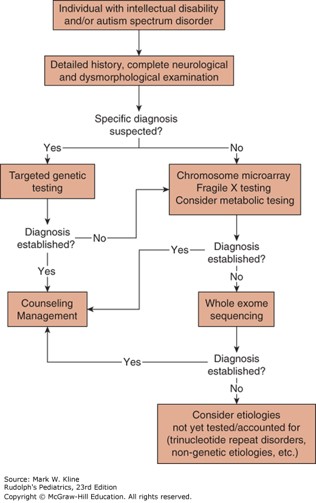