Presentation of a patient with chronic pelvis pain
Eric Shamus, DPT, PhD
Professor, Chair of Department of Rehabilitation Sciences, Florida Gulf Coast University
Follow
Like Be the first to like this
0

Scenario: A 45-year-old woman reports that 3 years ago she had a urinary tract infection (UTI) that was treated with antibiotics. She had recurrent symptoms of UTIs every 2 to 3 months for the next 2 years until during the last episode, she was told by the physician that the urinalysis was negative. The burning with urination was painful. In the past year she has developed more symptoms. She has noticed that she has to urinate more frequently, at least 10 times per day. She wakes up at least three times at night to urinate. Pain is temporarily relived by urination. She reports that in the last year, she has started having problems with bowel movements. Sometimes she is constipated, and sometimes stools are loose. She never had these problems before. She now is having pain during intercourse, and sometimes feels a throbbing pain in the vaginal regions while she is working at her desk. She has stopped exercising because she is concerned that running is making her symptoms worse. She is afraid to have intercourse because it was very painful the last time.

Question: What are some interventions that could be prioritized to help the patient attain an independent pain management goal?

B. Functional training for lifestyle changes

C. Exercise and functional training for the PFM

D. All of the above

Answer with rationale:  D. All of the Above

Internal and external neuromuscular electrical stimulation are important because they assist with decreasing pain and limiting frequent urination.

Functional training can also assist with alleviating urinary symptoms such as incontinence.

Exercise and functional training for the pelvic floor muscles can aid in limiting symptoms such as pain and incontinence as well.

These interventions are part of a well rounded plan of care for chronic pelvic pain syndrome, working to address all symptoms of a complex and nonspecific diagnosis. 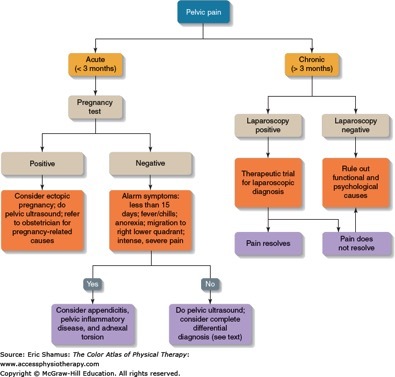 Presentation of a patient with chronic pelvis pain