The treatment of cerebrovascular disease focuses on preventing strokes and TIAs by removing the source of atheroemboli or, less commonly, by improving blood flow. Carotid endarterectomy, the removal of the atherosclerotic lesion at the carotid bifurcation, is the primary operation performed. In the North American Symptomatic Carotid Endarterectomy Trial (NASCET), carotid endarterectomy was shown to reduce incidence of ipsilateral stroke from 26% to 9% at 2 years in patients presenting with either TIA or stroke and carotid lesions of 70% stenosis or greater. The results also favored surgery in patients with moderate carotid stenosis (50%-69%), but less dramatically. The 5-year risk of ipsilateral stroke was 15.7% among patients treated surgically (n = 1108) and 22.2% among those treated medically (n = 1118; P = .045). Patients with stenoses of less than 50% did not significantly benefit from surgery. As such, patients with symptomatic lesions producing a stenosis of 50% or more may be offered surgery provided they are otherwise eligible.

Large clinical trials have also shown a benefit of surgery for asymptomatic carotid stenosis. Both the Asymptomatic Carotid Atherosclerosis Study (ACAS) in North America and the Asymptomatic Carotid Surgery Trial (ACST) in Europe showed that stroke incidence is halved (11%-12% to 5%-6%) by carotid endarterectomy compared to best medical therapy at 5 years of follow-up in patients with at least a 60% stenosis. “Best medical therapy” included antiplatelet agents and statins in the ACST. Although the ACAS did not show a benefit for endarterectomy in women, the larger European study did. Due to the improvement in best medical management since the time of these trials, there is no longer a consensus threshold for offering surgery. Many practitioners offer surgery for selected asymptomatic patients with 80% or more stenosis.

Importantly, carotid endarterectomy cannot be performed when the internal carotid artery is completely occluded, because complete thrombectomy is difficult and residual clot may embolize, creating additional lesions. Furthermore, the risk of embolization from a totally occluded carotid is extremely low and generally obviates the need for surgical intervention.

Early studies of carotid angioplasty and stenting (CAS) suggested similar morbidity and mortality rates to carotid endarterectomy. Because of the higher rate of emboli with stenting, cerebral protection devices, either filters placed in the distal internal carotid or devices that cause flow cessation or reversal, should always be used. After stenting, clopidogrel is prescribed for at least 30 days to limit late embolization.

Two large randomized studies found more strokes after CAS than after endarterectomy: the International Carotid Stent Study (ICSS) and the Carotid Revascularization Endarterectomy versus Stenting Trial (CREST). Conversely, there were more myocardial infarctions after endarterectomy. At present, stenting is reserved for patients with anatomic (hostile neck anatomy due to prior radiation or surgery, prior carotid endarterectomy, or distal lesions not readily accessible via a neck incision) or medical (severe cardiopulmonary disease) contraindications to endarterectomy. 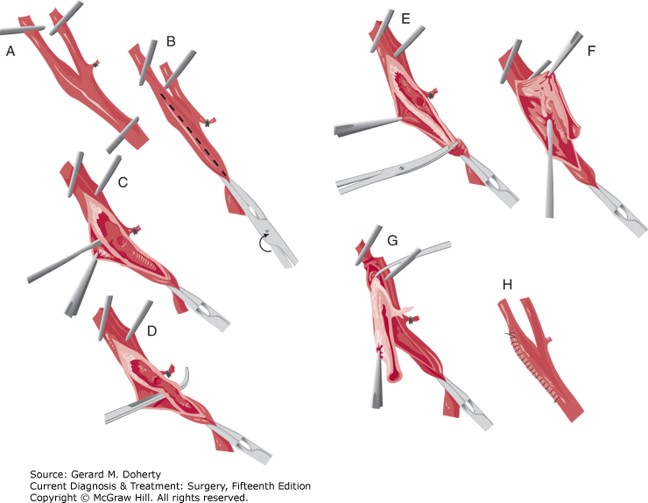 1. Magnetic resonance angiography (MRA) is contraindicated in the following patient groups EXCEPT those with

2. The most common cause of ischemic stroke is

3. The correct classification for the degree of stenosis in the internal carotid artery of a patient with a luminal diameter of 69% is

3. The correct answer is B. Moderate