The National Pressure Ulcer Advisory Panel (NPUAP), the European Pressure Ulcer Advisory Panel (EPUAP), and the Pan Pacific Pressure Injury Alliance (PPPIA) have collaboratively defined a pressure ulcer as the following:  A pressure ulcer is a localized injury to the skin and/or underlying tissue, usually over a bony prominence, resulting from sustained pressure (including pressure associated with shear).  In addition, they state that “a number of contributing or confounding factors are also associated with pressure ulcers; the primary of which is impaired mobility.”

More recently, the 3 panels have moved toward referring to all wounds related to pressure and shear as pressure injuries.  Any wound is a result of tissue injury, and pressure and shear can definitely cause tissue injury before any dermal wound is visible.  For the sake of the next few presentations that deal with pressure ulcers, the author shall refer to pressure injury as the tissue destruction that occurs subcutaneously and pressure ulcer as the dermal wounds that occur as a result of underlying tissue injury.

The NPUAP has further developed characteristics of pressure injuries and wounds based upon the depth of the tissue affected, and also defined those tissue injuries that sometimes appear as pressure ulcers but by definition are not caused by pressure or shear.  The diagnosis based upon etiology becomes very important when patients are admitted to hospitals and long-term care facilities with pre-existing wounds, when patients develop wounds while in the care of health professionals, or when individuals and institutions are involved in litigation about facility responsibility for pressure wounds that develop while caring for a patient.

The next few weeks will be a discussion of pressure ulcer stages (including diagnosis and treatment), as well as examples of wounds that should not be diagnosed and treated as pressure ulcers.

Terms that need to be understood in order to diagnose the etiology of pressure injury and ulcers include the following:

Normal pressure force: a direct force applied perpendicular to the skin surface, e.g. the forces on the ischial tuberosities when a person sits on a hard surface.

Shear force: a force that is parallel to the skin surface that translates to shear between the bony surface and the adjacent soft tissue, e.g. the forces on the coccyx or sacrum when a person slides down in a head-elevated bed.

Friction:  the force of two surfaces sliding with respect to each other, e.g. heels or elbows rubbing on the bed linen, resulting in inflammation or a friction blister.

Strain: a measure of the relative deformation of the soft tissues as a result of the load placed upon them.

Stress: a measure of the force transferred per unit area of the soft tissue.

Regardless of the amount and depth of soft tissue damage, treatment of any pressure injury or ulcer begins with identifying the causative factors, both mechanical and physiological, that result in the wounding; alleviating the mechanical causes of pressure and shear; and managing the physiological or systemic factors that inhibit wound healing.

Additional information on pressure injury and ulcers can be found in the following resources: 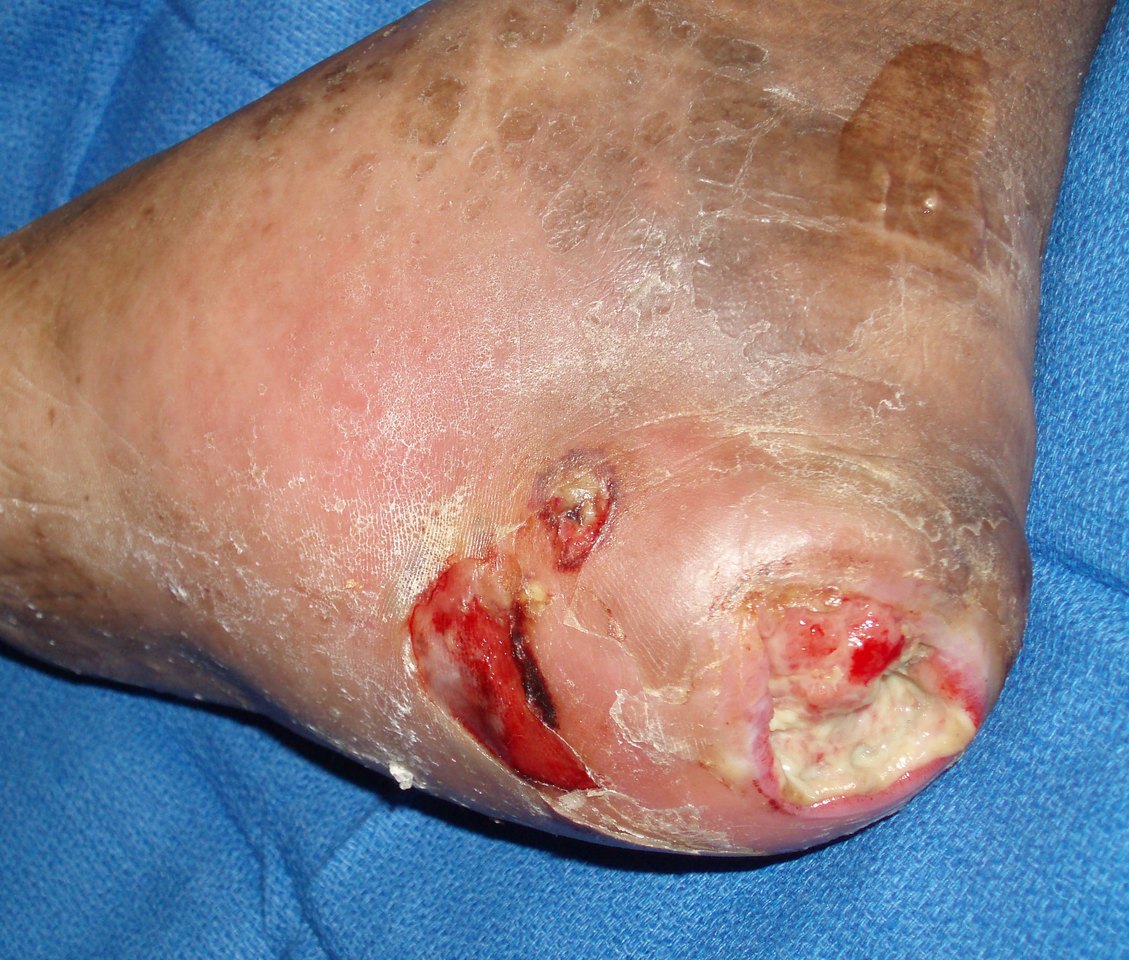