You are attending on the general pediatric service and have a 4-year-old male patient who was admitted with fever and unilateral neck swelling.
Leah Carton
Associate Editor - Pediatrics, Dermatology, Geriatrics , McGraw Hill
Follow
Like

Exam reveals a 3 × 4 cm area of right-sided cervical swelling that has central fluctuance. It is tender to palpation and the overlying skin is erythematous. The patient was previously healthy and has no known animal exposures. He does not appear to have poor dentition.

Acute unilateral cervical lymphadenitis is commonly caused by all of the following EXCEPT:

The correct answer is “E.” This patient has acute, unilateral cervical lymphadenitis, which is most often caused by either Streptococcus pyogenes (GAS) or Staphylococcus aureus. Atypical mycobacteria are usually a more indolent presentation with a characteristic violaceous appearance overlying matted lymph nodes. Bartonella henselae causes cat-scratch disease and should be considered if there is a history of cat exposure (especially kittens). In a young infant, you should consider group B streptococcus (GBS) cellulitis-adenitis, which can be a manifestation of late-onset GBS infection. Tularemia caused by Francisella tularensis after contact with an infected animal such as a rabbit or pet hamster may present as the ulceroglandular syndrome, which is characterized by a papular lesion in the drainage field of the inflamed lymph node. Older children with a history of dental disease may have acute unilateral cervical lymphadenitis due to anaerobic bacteria. The clinical history is very important in a child with cervical lymphadenitis as a detailed exposure history may help elicit possible infectious associations such as brucellosis from ingesting unpasteurized animal milk or goat exposure, atypical mycobacterium from ingesting unpasteurized milk, tularemia from a rabbit or pet hamster exposure, bubonic plague from prairie dog exposure, cat scratch disease from kitten exposure, or tuberculosis from travel to an endemic area. 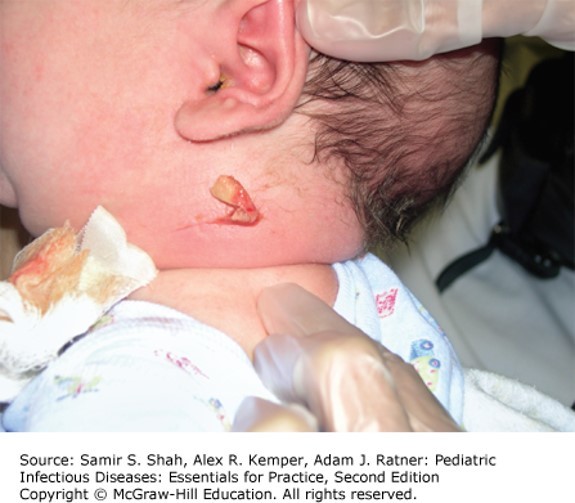 You are attending on the general pediatric service and have a 4-year-old male patient who was admitted with fever and unilateral neck swelling.