Numerous cells are involved in the proliferative phase of healing which involves the production of new tissue. The hallmark of this phase is granulation tissue, a combination of extracellular matrix and new capillaries. This post discusses the rolls of key cells, as well as a brief discussion of a periwound skin disorder sometimes seen under adhesive dressings.
Rose Hamm
Physical Therapy, University of Southern California
Follow
Like Liked by Mitchell McCorkle

The surgical site of the post-operative abdominal wound is in the early proliferative phase of wound healing, as evidenced by the beefy-red granulation that covers more than 90% of the wound. The wound is being treated with negative pressure wound therapy (NPWT).

What are the most prevalent, active cells during this phase of wound healing?

Macrophages play an integral role in all phases of wound healing, and are sometimes referred to as the orchestrator of the healing process.  Upon injury, monocytes leave the capillary and enter the interstitial tissue, at which point they morph into macrophages (the term actually means “big eaters”).  During the inflammatory phase, they phagocytose debris and bacteria and produce pro-inflammatory cytokines, produce growth factors, help activate both the innate and adaptive immune systems, and recruit cells (fibroblasts, endothelial cells, and keratinocytes) to assist in tissue proliferation.  As the proliferation phase progresses toward remodeling, the numbers of macrophages decrease; however, they continue to be present to phagocytose dead cells and matrix debris that occurs with the normal healing process.

Fibroblasts have the primary function of collagen synthesis (initially Type III that is later replaced by Type I).  They secrete the precursors for all of the components of the extracellular matrix, including glycosaminoglycans and fibronectin, as well as contribute to the immune response to injury.  As the wound advances to the remodeling phase, the fibroblasts morph into myofibroblasts which aid in wound contraction.

Endothelial cells are responsible for angiogenesis or the production of new capillaries that permeate the new extracellular matrix, together forming the granulation tissue seen in this photo.  Endothelial cells line the entire vascular system, and their production is stimulated by the presence of VEGF, a growth factor secreted by cells that are deficient in oxygen, such as macrophages, keratinocytes, and platelets in injured tissue.  As the endothelial cells reproduce and form new capillaries, they provide oxygen and nutrients needed for tissue repair.

What is the concern for the periwound skin in this patient?

The erythema and rash that extends beyond the wound edges are an indication that the patient is having an allergic reaction, probably to the adhesive on the transparent film that is being used to seal the NPWT dressing.  This is termed contact dermatitis.  The severity and patient complaints would determine how to proceed with the wound care.  Applying a moisture barrier (also called skin protector) to the skin before applying the transparent film may help, as it creates a thin layer between the skin and the film to prevent direct contact of the adhesive to the skin.  This also helps with removal of the dressing and reduces both skin irritation and pain.  If the skin irritation persists, a NPWT “holiday” may be necessary to give the periwound skin time to heal.  There is evidence of reepithelization at the edges of the wound, and in order to prevent the foam from macerating the new epithelium, a strip of non-adherent gauze at the edges would be beneficial.

Overlapping the foam over the periwound skin will also cause skin deterioration; however, it is doubtful that an experienced clinician would overlap the foam to the extent that the skin is irritated in this photo!

Further discussion of the cells involved in the proliferative phase of healing can be found in the following reference:

Rose Hamm
over 3 years ago 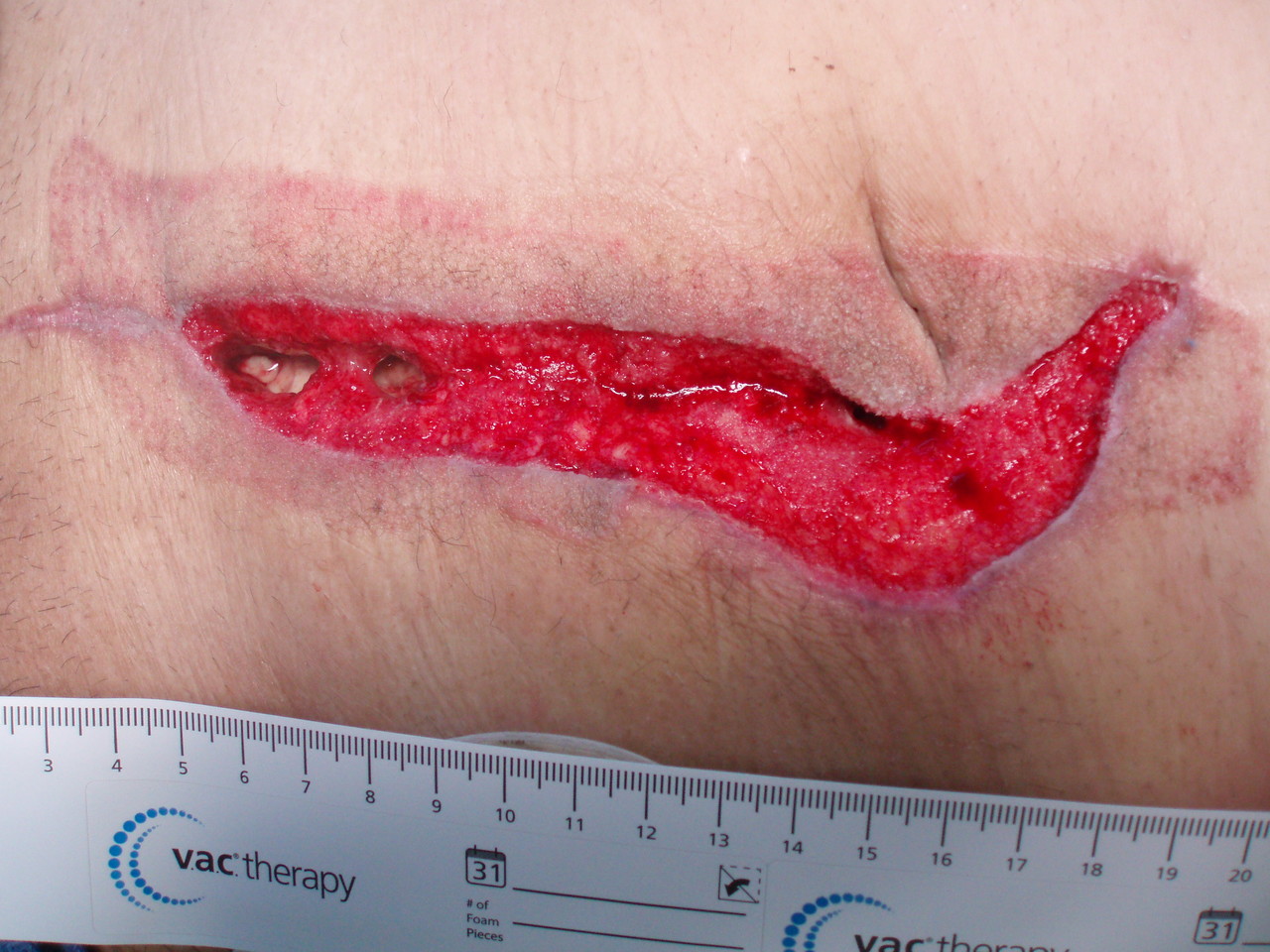 Numerous cells are involved in the proliferative phase of healing which involves the production of new tissue. The hallmark of this phase is granulation tissue, a combination of extracellular matrix and new capillaries. This post discusses the rolls of key cells, as well as a brief discussion of a periwound skin disorder sometimes seen under adhesive dressings.