He is a very active and bright child. As part of the screening exam, you check his visual acuity, which measures 20/20 and 20/60 in his right and left eye, respectively. His pupils are equal and reactive with no evidence of a RAPD. You perform the cover-uncover and alternate cover tests and do not detect any deviation. His extraocular movements are full and his red reflex appears normal. The remainder of the exam is normal, and he is otherwise healthy with no significant past medical history. His mother recalls her brother being treated for a “lazy eye” at a young age.

What is the most likely cause of poor vision in this child?

The correct answer is “B.” The patient’s history and physical exam are most consistent with amblyopia. The lack of eye movement on cover-uncover and alternate cover tests is not supportive of a diagnosis of strabismus. The presence of a normal red reflex makes both cataract and retinoblastoma unlikely answers. Lastly, the extraocular movements would be limited in a patient with a cranial nerve VI palsy. Amblyopia (“lazy eye”), which has an estimated prevalence of 2% to 4% in the general population, is the most common cause of decreased vision in childhood. For vision to develop, both eyes must see objects clearly and transmit a signal to the brain. If one eye has impaired visual input to the brain, the brain will favor the other eye so that a single clear image is produced. If the condition goes untreated, the brain will ignore all input from the affected eye, resulting in permanent blindness in the affected eye. Amblyopia often remains undetected until routine vision screening for school or physical exams. Because it is a preventable, treatable, and potentially reversible condition, amblyopia should be detected in a timely manner. 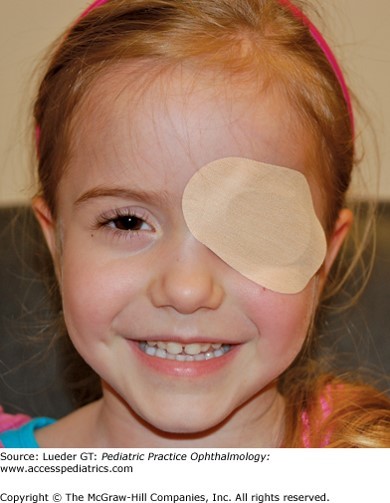 A 6-year-old boy presents to your office for his yearly routine examination.