A 25-month-old boy is brought by his parents for a routine visit.
Leah Carton
Associate Editor - Pediatrics, Dermatology, Geriatrics , McGraw Hill
Follow
Like

His parents note that he is very healthy and reaching the appropriate developmental milestones. They ask if they should be concerned about his eyes. Over the past month, he has been exhibiting turning in of his eyes. His father states that he had a similar issue as a child, but that it was corrected with eyeglasses. You observe alternating turning in of the infant’s eyes during your exam. The turning in appears to be constant. On penlight exam, you note that the light reflex is located near the center of the right cornea, but appears to be displaced outward on the left eye. On the cover-uncover test, you note that the deviated eye moves outward when the deviated eye is uncovered. His ocular motility is full in both eyes.

What is the most likely diagnosis?

The correct answer is “E.” This is an example of esotropia. “Eso-” indicates that the eye is deviated nasally or inward, whereas “exo-” describes a temporally or outwardly turned eye. “Phoria” describes a latent deviation that is not present under binocular conditions. A phoria is apparent only when binocularity becomes disrupted, such as when one eye is covered. “Tropia,” on the other hand, is manifestation of strabismus that is observed under binocular conditions, even when one eye is not covered. A tropia may be constant, as in this case, or intermittent with varying control. Though a cranial nerve VI palsy would result in esotropia, a limitation in the outward movement of the eye would also be present. The Hirschberg test, cover-uncover test, and alternate cover test are important in the evaluation of childhood strabismus. 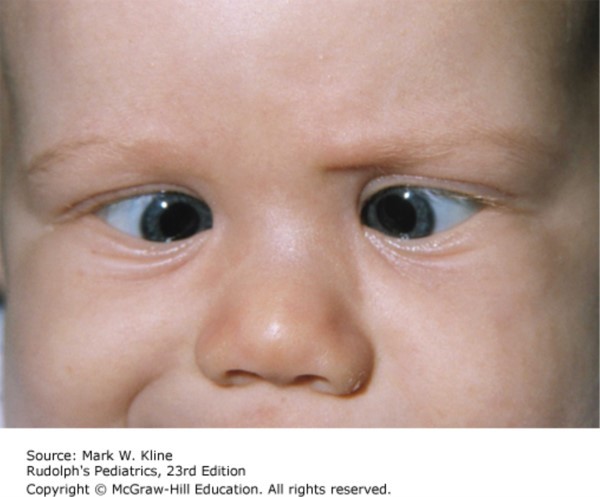 A 25-month-old boy is brought by his parents for a routine visit.