Her mother reports that she was previously healthy but seemed to have a common cold last week. She has now had 3 days of fever, difficulty and pain with swallowing, as well as apparent neck pain. Physical exam is notable for cervical lymphadenopathy, neck tenderness, and a refusal to perform cervical neck extension or lateral rotation. Her posterior pharyngeal wall is erythematous and appears to be bulging.

Based on this history and physical exam, the most likely diagnosis is:

The correct answer is “C.” This patient has a retropharyngeal abscess. Younger children often present with a preceding history of viral URI symptoms while an older patient usually has a history of pharyngeal trauma such having had an endoscopy procedure, dental procedure, intubation, or penetrating injury such as a pencil to the back of the throat (think falling asleep at school while chewing on a pencil!). The most common symptoms include fever, neck pain, neck swelling, sore throat, and odynophagia, although children may also have a muffled voice or drooling. The exam is notable for neck tenderness, limitation of cervical movements (especially neck extension), torticollis, and cervical lymphadenopathy. Know that in reality a toddler is not going to be overly cooperative. So be suspicious. 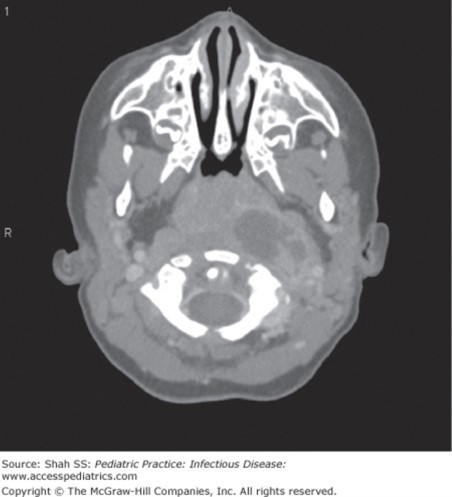 A 4-year-old girl presents to the emergency department with a chief complaint of “fever.”