His heart rate is strong, at 160 bpm. No murmurs are heard on exam. You notice that he is cyanotic and administer supplemental oxygen through a face mask. No change in color is noted. As the infant is otherwise stable, he is transferred to the neonatal intensive care unit (NICU). He is trialed off oxygen, resulting in an oxygen saturation of 72%. He is placed back on supplemental oxygen by nasal cannula, with an increase in saturation to 78%.

Which of the following is the most likely possible diagnosis?

B. D-transposition of the great arteries.

The correct answer is “B.” A VSD will not cause such significant cyanosis. Immediately after birth, a VSD will not cause symptoms and a murmur is unlikely to be present. This is due to relatively elevated pulmonary pressures, which are normal in the immediate newborn period. This prevents significant shunting across the VSD. Cor triatriatum sinister and cor triatriatum dexter result from subdivision or partitioning of the left or right atrium respectively by a membrane. In cor triatriatum sinister, this can present as pulmonary venous obstruction in severe forms and be asymptomatic in mild forms. Both are quite rare. Scimitar syndrome includes partial anomalous pulmonary venous return from the right lung, often with right lung hypoplasia, and dextroposition of the heart. Administration of oxygen that does not significantly increase the oxygen saturations is suspicious for a cyanotic heart disease. Of the options listed, D-transposition of the great arteries (DTGA) is the only cyanotic congenital heart defect. DTGA results when the aorta arises from the right ventricle and the pulmonary artery arises from the left ventricle. (See Figure 5–10.) There may or may not be a VSD. This results in two parallel circulations. Life is dependent on mixing of the blood, either through the patent ductus arteriosus, atrial septal defect (ASD), or VSD. Mixing through an ASD is often the most effective shunt as significant bidirectional shunt can occur, to allow both deoxygenated blood to flow to the lungs and oxygenated blood to flow to the body. If the existing ASD is restrictive, a balloon atrial septostomy (Rashkind procedure) can be performed in the cardiac catheterization lab to improve mixing of blood. 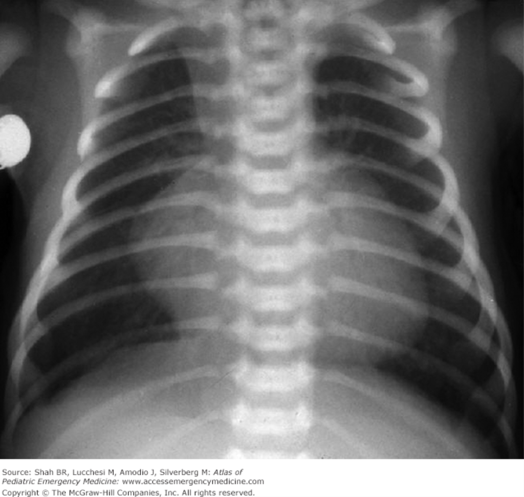