An 8-year-old girl presents to the emergency department because of lumps on the right side and back of her head.
Leah Carton
Associate Editor - Pediatrics, Dermatology, Geriatrics , McGraw Hill
Follow
Like

Her parents first noticed them several weeks ago and thought they were “zits” because they were soft and painless. Now, the lumps have grown and are still soft and painless. The patient has previously been healthy, although the parents report that she has been getting up five to eight times each night to void, and is drinking more than usual for the past 2 to 3 weeks. Vital signs are within normal limits. Physical exam is remarkable for soft, nontender nodules over the right temporal bone and right occipital scalp. You also notice a rash on the right pinna, which is scaly and erythematous, and which the patient reports has been there for months; it is occasionally pruritic. A skeletal X-ray series is performed, and reveals a 1.5 × 1.5 cm round, lytic lesion in the right temporal bone and another 2.5 × 3 cm similar lesion in the right occipital bone, the latter of which is shown in Figure 4–5.

Skull finding in Langerhans cell histiocytosis (LCH). This plain film exhibits a large lytic lesion in the right occipital bone. There is minimal sclerosis and no periosteal reaction. This appearance is consistent with skull lesions common in LCH. (Used with permission from Adam D. Wolfe, MD, PhD.)

Which of the following is the most likely diagnosis for this patient?

D. Trauma with contusion of the skull.

The correct answer is “E.” Langerhans cell histiocytosis (LCH) is a proliferative disorder of dendritic cells. While it is not a clonal disease, and therefore not considered a malignancy, it can involve multiple organs and cause significant and destructive systemic disease. The average age of presentation is young, approximately 2.5 years, but LCH can present at any age. LCH may present with solitary or multiple bony or soft tissue tumors that may or may not be painful; in more ill-appearing children one should suspect additional organ involvement. (See Table 4–3 for a summary of organs that may be involved.) Diagnosis is suspected based on clinical imaging findings, and may be confirmed by biopsy. LCH classically will stain immunohistochemically positive for CD1a and S100. Involvement of specific bones of the skull (ie, mastoid, orbital, sphenoid, and temporal bones) carries additional risk of intracranial progression. This may involve the neurohypophysis (posterior pituitary gland) and cause central diabetes insipidus, as was seen in the vignette, and merits MRI of the pituitary for evaluation, as well as endocrinology consultation. Patients who have LCH involvement of the liver, spleen, and bone marrow are at highest risk of treatment failure. Frontline therapy for LCH includes chemotherapeutic agents and corticosteroids, typically given over 1 year. Cure rates for even high-risk patients are greater than 80%, although significant rates of recurrence (25–40%) dictate retreatment with salvage chemotherapy for many patients before the disease resolves. None of the other option choices given would be expected to cause a lytic lesion of the skull that lacks surrounding sclerotic changes or periosteal reaction. 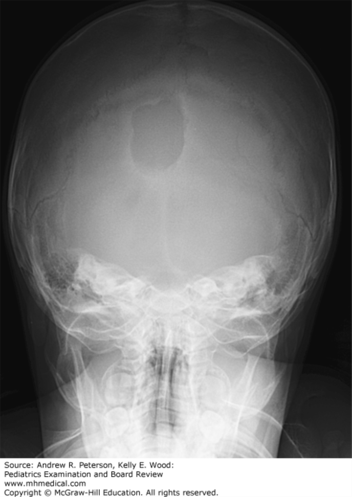 An 8-year-old girl presents to the emergency department because of lumps on the right side and back of her head.