A 6-year-old girl is brought by her mother for evaluation of a new rash in August.
Leah Carton
Associate Editor - Pediatrics, Dermatology, Geriatrics , McGraw Hill
Follow
Like

Her mother noted an approximately 2-cm red circular lesion a week ago. It has increased in size slowly over the last week and now has central clearing. (See Figure 20–6.) The girl has been outside a lot this summer but does not remember any tick bites. She is afebrile and has no other symptoms. You suspect Lyme disease.

Erythema migrans is the hallmark of Lyme disease. It starts as a small red bump then grows to form a large annular erythematous lesion. Central clearing may occur to form the classic “bull’s eye”. (Used with permission from Nathan Price, MD.)

Your next step should be to:

D. Observe, only, since she is otherwise asymptomatic and has no reliable history of tick exposure.

The correct answer is “B.” Lyme disease is caused by the bacterium Borrelia burgdorferi. It is transmitted by ticks, predominantly by the Ixodes scapularis or deer tick, though other Ixodes species can transmit the organism. Geographic distribution in the United States tends to follow the Ixodes habitat, which is more common in the Northeastern United States. The disease is named for Lyme, Connecticut, the town nearby to where multiple early cases were described. The tick generally needs to feed for 36 hours for the bacteria to be transmitted. A large proportion of patients with Lyme disease have no recollection of a tick bite. This is likely due to the fact that bites are painless and the tick can feed in areas not easily observed such as the back or scalp. In addition the nymph, which has a higher likelihood of transmitting Lyme disease than the adult tick, can be very small, about the size of the tip of a ball point pen. Typically after the tick bites, a small macule appears within a few days. The macule then increase in size to several centimeters (cm) in diameter. The lesion may not have the classic bull’s eye appearance and it is often missed because it can be asymptomatic. It then fades over the next days to weeks. Fever can occur, especially with the multiple erythema migrans that occur in the setting of dissemination of the organism. Other symptoms such as arthritis, cranial nerve palsies (especially facial nerve), meningitis, encephalitis, heart block, and fatigue are possible as well. Early disease such as erythema migrans in this patient is a clinical diagnosis. Serologies in early disease are not recommended due to poor sensitivity and specificity. Antibiotics should be prescribed even if symptoms are mild because treatment can prevent the development of arthritis, which is fairly common in children. Doxycycline is generally the oral drug of choice but is usually not used in children younger than 8 years of age due to the potential for staining of permanent teeth. Amoxicillin is used to treat younger children with Lyme disease. Other drugs that may be used are ceftriaxone (especially if there are severe symptoms, including CNS involvement) and cefuroxime. It is reasonable to use doxycycline prophylaxis after a tick bite in areas of high endemicity if the patient is aged 8 years or older and the tick is an I. scapularis species that was attached for at least 36 hours. Prophylaxis with amoxicillin is not recommended. 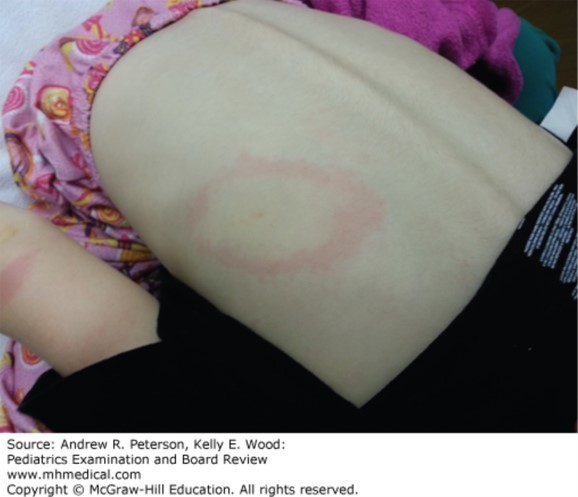 A 6-year-old girl is brought by her mother for evaluation of a new rash in August.